Well hello there, Crawley Town. Let's talk about you.
To most Football League supporters Crawley are one of those Conference teams that are a bit of an unknown. Not a former League club in hard times, not one of the classic non-League big hitters (Kettering, Kidderminster). However, they do have a long history, having been formed in 1896, yet not turning professional until they joined the Southern League in 1962.

More recently the club has been concentrating on survival after several years of financial turmoil. Taken over in summer 2005 by local millionaire Azwar Majeed, with his brother 'Chas' joining as chairman, the club turned full-time in an effort to build on recent success. Early season form was poor and manager Francis Hines, who was popular with fans, was replaced with John Collins.

This was small fry compared to what came later. In March 2006, the entire backroom staff had their wages halved and the playing squad was transfer-listed. Why? 'Silent' investors had withdrawn funding from the club – allegedly because of poor performances. These investors were later revealed to be SA Restaurants, part of the SA Group owned by... the Majeed family.

Then it emerged that chairman Chas Majeed had been declared insolvent in May 2004 and had not been discharged from bankruptcy – meaning it was illegal for him to be involved in the running of a limited company. A few weeks later Chas relinquished the role of chairman to his brother Azwar, but carried on at the club in a loosely defined media/PR role. At this time, Azwar himself was before the courts on assault charges, on top of allegations that he'd also been involved in two companies that were forced in to liquidation. The Conference later docked Crawley three points for breaching its wage cap.

1:58 Steve Evans receives a police escort off the pitch during the Woking v Crawley match, January 2008

The 2006-07 season began with a further 10-point deficit after the administrators arrived in the summer. The Majeeds remained in control (sacking Hollins after a shaky run of results) and turned down an offer to sell the club in September – arguing, ironically, that they weren't happy with the financial assurances given by the bidder. One winding-up petition later, the Majeeds declared that all debts had been paid that the club was rebuilding with a new chairman (former vice-president Vic Marley) and a new manager, Steve Evans (yes – he of Boston United tax fraud fame). In spite of this, the Conference imposed another six-point deduction and transfer embargo for the following season because the club had failed to confirm the payment of the CVA.

Things improved in April 2008 when a consortium under the name of Prospect Estates Holdings Ltd, which included former owner John Duly, took control of the club from the Majeeds. Duly had already saved the club when it went into administration in the late 1990s. The club stabilised, but still suffered a four-point deduction (reduced to one on appeal) for fielding an ineligible player – Isaiah Rankin. However, they suffered no further penalties for financial mismanagement.

Last season things improved further – the club finished in its highest ever place (see below) and the new owners confirmed that all debts had been paid in full. In April 2009, Azwar Majeed was jailed for financial irregularities including tax evasion to the sum of £800,000.

Do you come here often?
After turning professional in 1962, Crawley spent many years flittering about in the Southern League. Eventually, they got their arse in gear and stormed the league in 2003-04, finishing 12 points ahead of second-placed Weymouth. Since then, and in spite of the problems listed above and the many points penalties imposed, they have managed to retain their Conference Premier status. This culminated last season in the club's highest ever finish: seventh place. 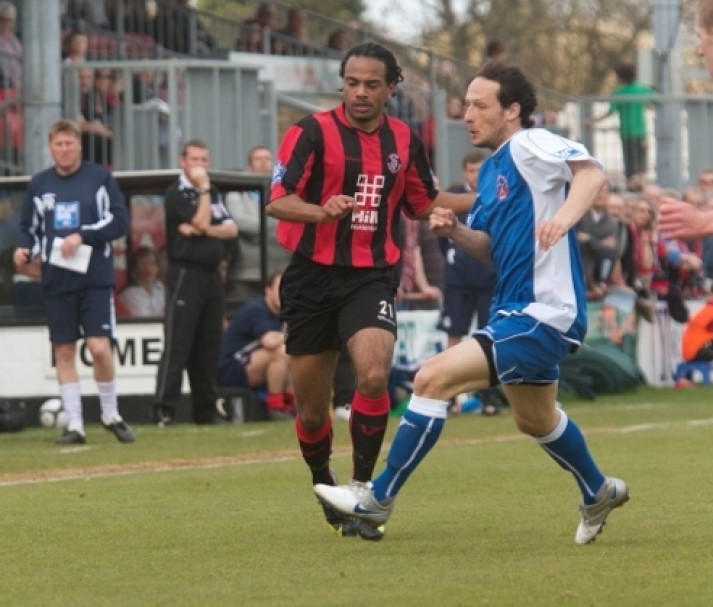 Haven't I seen you somewhere before?
Crawley are one of a handful of Conference Premier sides that Town have never played a competitive match against. Despite this, there are some recent links between the two clubs. Non-League free-scoring Mars Bar fan Daryl Clare played for them in their first season as a full-time team – but left after only a year when those financial problems started to bite. Isaiah Rankin spent a season there in 2008-09 on his protracted route to football oblivion (or Forest Green Rovers, depending on how you see things). And until very recently, legendary "Frenchman" Thomas Pinault ran the midfield – but unfortunately for Pinault fans he chose not to renew his contract this summer and has returned to France. To concentrate on smoking.

One person still at the club who will be familiar to Town fans is the mascara-wearing, ex-Boston United, tax crook Steve Evans. Most will be hoping that his next visit to Blundell Park is similar to his last visit in 2006, when he received a police 'escort' out of the ground and had to listen to the remainder of the match on the team coach radio.

What can we do when the sun goes down?
Crawley bills itself as 'a town for the future' but I'm not sure what type of horrific dystopian future that might be. Now, I may not have done the most thorough research on this section of the Rough Guide, having spent all my time unpicking the Majeeds' rule of ruin, but even the local council doesn't have a lot to say about the place other than there are three shopping areas and a nice park. Tilgate Park does sound a particularly pleasant attraction though, apart from the bloody golf course in it, of course. Failing that, you could always go to Gatwick and watch planes.

Do say
"Isn't it great to be debt-free?"

Do you know the Crawley area? We want your recommendations for local pubs, cafés or B&Bs, to feature in our pre-match factfiles during next season. Use the Cod Almighty feedback form to send them in – or to share any other thoughts you might have about our Rough Guide to the Conference.