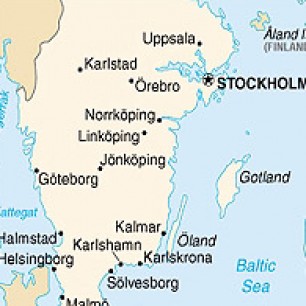 Sweden? Who might they be?
That's the Kingdom of Sweden to you. A constitutional monarchy slightly bigger than California, it's a smorgasbord of light wood and light pop. Officially neutral since 1814, its population density is low; much like Lincolnshire then. This is a nation of contradictions wrapped inside an enigmatic iced glove of studied relaxation and very boring footballers.

Administratively, financially, footbally they've been all over the place for decades. Up, down, down, down, up and down again. Administration, Willie Carson, sackings galore, historical faces, hysterical places; it's been a magic carpet ride, which is almost apposite given the magic roundabout spinning away outside the gates. XTC were inspired by it, you know. Did the pelican crossing outside the Imp do the same for Rod Templeton? Did the flashing green man and incessant beeping provide the template for Thriller? Well, maybe it inspired the video rather than the song, especially on match days.

They're a bit like us, but with higher highs and lower lows. So they're like a hormonally challenged older sister with braces and glasses, who's convinced that underneath the grey cloak of concrete and clay, she is beautiful; it's just that the world hates her. And with Dennis Wise now in charge, they're right.

Last season
Started at the bottom, stayed at the bottom, were bottom. They lost eight in a row, won one, then promptly lost three more. Just hopeless and hapless throughout. Andy King was finally pinged into outer space and Iffy O took over, with a little help from multicultural Big Ron; this did not last. It was their away form that did them, but they somehow finished 23rd and scraped to within four points of survival. Must have been a really bad division.

They'd like to forget about it. We know the feeling. Remember what, exactly? Shall we, like half their squad, move on?

Anticipate with relish
So we finally get to the bottom of the mysterious rise and fall of Gilbert O'Sullivan. That's some celebrity tour. If you're lucky you may bump into Jamie Cullum... in a 36-tonne juggernaut.

I'll let you into Swindon's best kept secret: The Beatles live at the Bowl washere, in Swindon, not Hollywood. Like the moon landings and Rio Ferdinand's hair it was a CIA conspiracy. Mabel Stranks would have known.

Come to think of it, there's an awful lot of jazz in Swindon. At least we know where they are and can deal with them appropriately. That's something to anticipate with relish: the slaughter of the syncopating Swindon swingers.

Anticipate with dread
Being hungry and wandering into Pizza Express on jazz night? I once arrived early in Swindon and had several hours to fill. It was impossible: the town centre made Scunthorpe look glamorous.

We don't really care about them, either way. We are aware of their existence; we have to play them and sometimes we don't lose to them. Their toilet doors don't have any door stops, so you can have a very satisfyingly dramatic flinging open of the doors after we've conceded a last-minute penalty of great dubiosity (Yes, Fjortoft, we remember).

It really would have been nice if we'd gone up, then we wouldn't have that long, pointless journey to the middle of nowhere. Oh look – that's what they think too.

The way forward
It's July: they've only got a handful of songs to sing you. They haven't even got a goalkeeper yet, though they may, to use a technical football expression, be 'sorted' soon. Lee Peacock is standing under Steve Phillips' balcony with his lute, trying to woo his old pal over to the County Ground. Oh yes, the old game of those who have rejected us: Lee Peacock and Gareth Whalley. See, it didn't do them any good in the end. They'll still have to come to Blundell Park, and we'll boo them anyway, just like we would if they'd signed for us.

Wise will either propel them to Wycombe-like early season unbeatability, or leave within the year, taxi-bashing his way to Swindon station wailing that he hasn't been given the tools to do the job (surely a Meek footballing cliché). As the headmaster of Humberston County Junior School said to me in 1974, a bad workman always blames his tools. And all because I didn't sharpen my pencil.

I'm looking forward to Swindon's Pook and Shakes, though they may have to see a doctor afterwards.

"The beast is back," cries the website, which translates as a large defender they had on loan has signed a contract: Jerel Ifil, formerly of Watford, if you are 'bovvered'. That is how you young people talk these days, isn't it? Did I tell you Gus Poyet is Wise's wise old number two? I didn't, did I. But now I have.

Remember your pencil sharpener, Dennis, and all will be fine.

You demand a prediction? At this stage I plead the fifth.