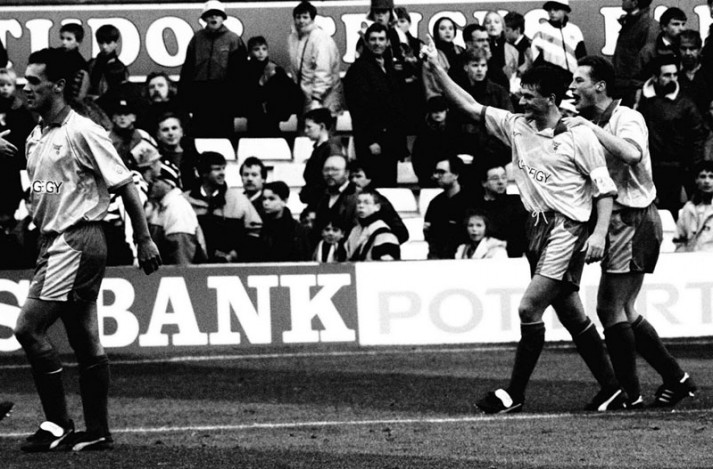 Once upon a time there was a Town team, to whom we used to raise a glass or two. Remember how we'd laugh away the hours and dream of all the great things they could do.

Those were the days.

This was 1992 and deep in the bleating heart of the Geordie Nation. And not just any old Toon team, but KEVIN KEEGAN'S Newcastle with the unstoppable aura of invincibility seeping out of every Tyneside pore. Not just unbeaten but marching through the fixtures with win after win after huge, crushing win: trampling their foes underfoot. It'll all be over by Christmas. And then along came little old Grimsby with the dodgy loan keeper with dodgy permanent hair.

All Newcastle had to do was turn up...

Town's duty was to be the Geordie Globetrotters' sacrificial lambs, to allow history to be made in style, with vim, verve and swerves. Ah, but the cussed team with the cussed manager were having none of it. The minutes ticked by and the shots flew by.Dead-eye Dobbin stood motionless, waiting, waiting, waiting for the ball to arrive

Temperature rising, the fever is high, the Geordies are screaming and soon they will cry.

In the final minute Newcastle cleared towards their centre-forward on the halfway line. The imperious Paul Futcher stepped forward and eased the ball off a Tyne toe, drifted past a midfielder and caressed a pass out to magnificent Mendonca on the left. Gilbert – I'm sorry, it's the names, the names, let me wipe a nostalgic tear from my eye and yours – darted towards the penalty area. Espying this movement, Mendonca ignored Barry Venison's hair and rolled the ball into gliding Gilbert's flightpath.

A tiny knot of Townites exploded, a whole town levitated to the sound of John Tondeur and a man danced around a hoover in Watford, much to the consternation of a gaggle of old ladies at the bus stop.

History was made. By Jim Dobbin, with that goal. Our history.

To watch this goal is to understand that Buckley Town team. 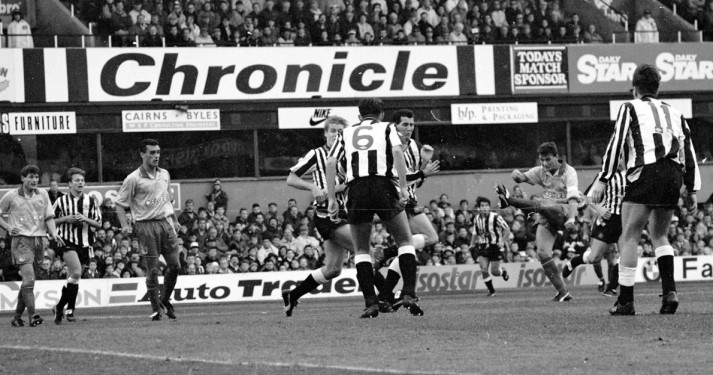 "Walking to the match in a Town black and white shirt, amongst the black and white Geordie thousands, I'm ashamed to admit it felt like a mere cheap copy. Leaving, the pride was incredible. I remember provocatively pointing to the winner's club badge on my shirt. Thank you, Jim Dobbin."
Rick Fuller

"Town were in that the horrible yellow shirts/red shorts away kit combo."
Ian Jackson

"There's a kind of hush all around St James Park as Jim stuns the Geordies."
Alan Burley

"What a goal. Two Newcastle fans (friends) had crowed all day until that moment."
Christine Wood

"Sheer ecstasy amongst the 900 Town fans squashed into one corner of the ground. Silence from the 29,000 Geordies."
Martin Robinson

"I almost crashed my car on the M62 when it went in."
Lumpy Town

"My old schoolmaster John Tondeur made me feel I was there as he described the scenes of delirium and bewilderment in that corner of St James's Park."
Woodsy

"A memorable, classy player, classy goal and a typical Mariners away win at a big club."
Matt Ladson

"Love it! Just love it! Sorry Kev, the real Black and White legends win this one."
James Parrott

"Jim's comment on the radio after the game makes this goal. 'When Buckley called to get it into the corner, I thought he meant the top corner.'"
Richard Tindall

"Unsung hero gets his rewards for all his hard work, with this history-stopping special."
Alan Hilditch

"Thank God he scored as otherwise a very good Town player would have been forgotten."
Bedders

"Never to be forgotten in our family, much mentioned. It encouraged a younger generation to start supporting. I think they have forgiven Jim Dobbin for that!"
Mike Hubbert

"Town were the most famous team in the country... for a day."
Simon M

Many thanks to the Grimsby Telegraph for permission to reprint photos from the game.