How Grimsby was my valley

Invited by the Mariner programme editor to nominate his dream team, and in an attempt to avoid becoming the 22nd person to name John McDermott at right-back, Pat Bell explored the links between Wales and Grimsby...

Towards the end of the 2012-13 season, a few Town supporters seemed shocked to discover that there are a handful of Welsh clubs in the English football pyramid. It falls to me, as a Welsh Mariner, to remind Grimsby fans how much we owe the principality. 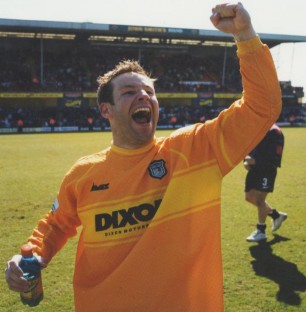 Danny Coyne
Danny Coyne was a Boy's Own hero of a goalkeeper. Never mind the crosses, feel the spectacular last-ditch saves.

Observers of certain other goalkeepers might have concluded that anyone who can catch in Wales plays rugby (naming no names, but if I was, I'd be naming Anthony Williams and Rhys Wilmot). However, the North Walian Coyne always did us proud. Except that one time he was facing Wales player-manager Mark Hughes in a match against Blackburn and let in a soft one, killing off his hopes of an international recall.

Tom Chapman
Tom Chapman was, with Hugh Morris, the first player to win an international cap while playing for Grimsby. On 29 March 1897 they both took the field at Sheffield for Wales against England. It is, as far as I can tell, the only time an international side has ever fielded two Mariners. They lost 4-0. By my reckoning, Wales have awarded six different contemporary Town players a total of 17 caps. No other country has come close to showing such appreciation of our footballing talent.

Darren Barnard
Even I did not really warm to Darren Barnard. He left Grimsby after we were relegated in 2004, saying that playing on for a fourth flight team would harm his international prospects. Sure enough, a few months later he was putting on the red shirt of Wales... their semi-professional XI. No higher ranked team wanted his services so he dropped into non-League football six years before we did.

Nevertheless, Barnard generated the ultimate 'No disrespect to the likes of Grimsby' quote. The Guardian, in a report on an international defeat by Serbia & Montenegro, illustrated the lack of depth in the Welsh squad by saying: "Grimsby's Darren Barnard played for Wales". Who did the Guardian then name man of the match? Darren Barnard, of Grimsby and Wales.

Rathbone was born in Merthyr and went on to play for Cwmbran. "Hard as nails" goes with the territory

Graham Rathbone
The sad news of 'Basil' Rathbone's death in 2012 brought forth memories of a player who had performed consistently for Town during the doldrums of the late 1960s and then played a large part in Lawrie McMenemy's 1971-72 championship winning side. The tributes routinely described him as "hard as nails". They might just as well have said he was born in Merthyr and went on to play for Cwmbran. "Hard as nails" goes with the territory.

Paul Futcher
For some reason, Welsh Mariners are mainly goalkeepers or forwards and Paul Futcher, it might be said, was actually born in Chester. However, I once had to sit through a match at the Deva Stadium with a contingent of the Grimsby support singing: "You're Welsh and you know you are" before launching into a bizarre fantasy about Lincolnshire RAF squadrons fighting Welsh bombers.

If you are going to sing anti-Welsh songs at Chester fans, you can hardly stop me claiming the maestro for my cause. If Futch had been born a couple of miles further west, he'd have had more than under-21 caps to show for his career.

Shaun Cunnington
Bourne, Shaun Cunnington's birthplace, is not even close to being in Wales, but Alan Buckley's first Grimsby captain got his start in the professional game at Wrexham. When Bobby Roberts brought Cunnington to Blundell Park, we acquired a 22-year-old with over 200 professional appearances to his name. His impact at Grimsby was positive and immediate, a far more seasoned player than if he'd been forced to footle around the part-time League of Wales for six years.

John Oster
John Oster was born in Boston but won under-21 caps while at Grimsby and went on to win 13 full caps for Wales. Oster is 'only' a second-generation Welshman, but how many people do you know who have had to leave Grimsby for their livelihood? Does that make them less proud of where they, or their forebears, came from?

There was nothing plastic about Oster. Asked what he'd sing on a karaoke night, he replied: "The Welsh national anthem"

That my father settled in Wales is how I have come to support both Grimsby and Wales. The teams you support, or indeed play for, are a benign way both of maintaining and combining your roots. There was nothing plastic about Oster, arguably the most outrageously talented player to graduate from the Grimsby youth team. Asked what he'd sing on a karaoke night, he replied: "The Welsh national anthem."

Dai Collier
Haydn Price, from Maerdy in the Rhondda Valley, was Grimsby's first manager and Dai Collier was one of several players he brought with him from the Mid-Rhondda club. Our top scorer in the 1920-21 season, Collier was the first Mariner to score in an international, for Wales in a 2-1 defeat by Scotland. Collier, by the way, was brought up in Ystradyfudwg. Ask for the programme editor and he will be happy to teach you how to pronounce it.

Jack Lewis
That Wales made the quarter-final of the 1958 World Cup owes a certain amount to rivals refusing to face Israel in a play-off, so arguably our finest moment in international football came in 1976 when we reached the last eight of the European Championships. Jack Lewis played a crucial role.

Late on in an important qualifier, the match was goalless. The man with the zapata moustache made ready to join the action. Wales scored. Lewis returned to the bench, an unused sub. It was the closest another second-generation Welshman got to a full cap, and Lewis was also the closest thing we had to a hero in the fallow period after McMenemy left Town. 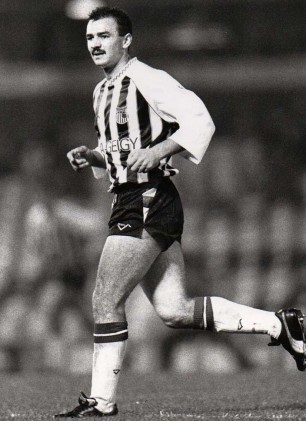 Like Rathbone, Tony Rees was born in Merthyr and he wound down his career with
his home town club and Cwmbran: rough places which breed not only hardness but
also finesse. The great Welsh rugby teams had not only strength but delicate skill: to watch them is to understand the place of sport in communities that have to work hard to survive, whether in a coal mine, in a foundry or on a trawler.

Like a Barry John dummy or a Shane Williams sidestep, Tony Rees's flicks were a thing of unexpected beauty in the maelstrom of action. If he had not existed, it would have been necessary for Alan Buckley to invent him. Luckily, the Welsh did it for him.

Pat Glover
Arguably the finest Mariner of all time, and unarguably our most distinguished international, with seven goals from his seven caps. He scored four during the 1936-37 Home Internationals, when Wales won all three matches to take the trophy outright for the only time in its history. It is not a feat remembered in Welsh sporting folklore in the same way as rugby Grand Slams, or even Cardiff's victory in the 1927 FA Cup. It appears the Welsh connection with its national side was weakened by having so many representatives plying their trade in England.

That so many of Wales's best players had to make their name in, and so enrich, the English game is the flip side of that coin which means the principality cannot support its own professional league. Reflect on that the next time you question the right of Wrexham to play at Wembley.

If this article makes you want to send its author up a Welsh mountain, there's good news for you. Wrexham Supporters Trust has invited representatives of 150 other clubs to join its sponsored walk up Snowdon on 29 June. Pat is joining Dan Humphreys on the walk to raise money for the Mariners Trust. To sponsor Dan and Pat, you can use the donate button on the Mariners Trust website, email pledges to enquiries@marinerstrust.co.uk or send cheques payable to Grimsby Supporters Trust to 9 Rymer Place, Cleethorpes DN35 0EW.

This article was first published in The Mariner, the Grimsby Town matchday programme. We are grateful to the programme editor for allowing us to reproduce it here, and also for providing the pictures of Danny Coyne and Tony Rees.