In 1987, Bobby Roberts had to build a team from scratch and with one hand tied behind his back. He almost succeeded.

7 May 1988. The last match of the season. The Mariners were on 49 points in the third division, two points below our final-day opponents, Aldershot. Fifty points is always the notional target for avoiding relegation, but a draw would not be enough. There was one of those end-of-season sets of shifting permutations that makes arithmeticians of us all – but each scenario had just one conclusion. Grimsby needed to win.

The crowd, 5,639, wasn't our highest attendance of the season, but when Sunderland, romping away with the third division title, had been the visitors the gate had been swollen by 2,000 away fans. For this relegation shoot-out, there were a few hundred Aldershot fans fenced in on the open terrace between the Pontoon and the Main Stand.

Straight from the kick-off, Town conceded a free kick on the halfway line. The ball was floated into the Mariners penalty area, where an Aldershot player rose unchallenged and headed the ball in. One-nil down in seconds and the only significant action by any Grimsby player had been to concede a free kick. The Mariners had begun the match on which their whole season rested by putting themselves at a disadvantage. That was entirely fitting. The Grimsby boardroom had been handicapping the club for years.

The board dismantled Town's most beloved squad since the 1930s, for cut-price feesGrimsby had been relegated from the second flight the season before under Mike Lyons. Only Lyons can take the blame for the long-ball tactics and the mysterious selections which emptied Blundell Park and saw us score just four goals and take two points from our last ten matches.

However, Lyons was not alone in his ineptitude. He had been appointed amid boardroom battles between Dudley and Ronald Ramsden. Determined to cut costs, the board sanctioned the dismantling of what is probably the club's most beloved squad since the 1930s.

Ron Counte, writing in Sing When We're Fishing, analysed the annual reports of the period. The 1987 report claimed credit for the directors as the club returned a profit of £66,000. This was achieved with net receipts from transfer fees of £398,000, as players like Tony Ford, Kevin Moore, Gordon Hobson, Andy Peake and Gary Lund were sold, usually, as the annual report admitted, for cut-price fees.

If the board's policy implied disregard for the supporters, it was still only part of the story. This was the period when home supporters had been uprooted from the Pontoon stand. It was also a time when the club tried to introduce a membership scheme, putting barriers in the way of the casual supporter attending Blundell Park. The sale of our best players had already set in motion the descending spiral of worse results and falling attendances. These policies gave an extra spin to the vicious circle. 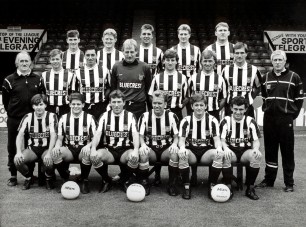 To assemble a squad at short notice and at a cut price, Roberts had to shop around among other clubs' cast-offs and to assemble something from Lyons' wreckage. Under the circumstances, there were bound to be players we'd soon forget. What is surprising is how many players endure.

Mark Lever and Tommy Watson made their debuts that season, joining John McDermott from the youth set-up. Kevin Jobling and Shaun Cunnington signed in March. Marc North was initially taken on trial. Our leading scorer with 11 goals, in our last but one game at Wigan he scored the only goal to keep our season alive.

Town's new goalkeeper, Steve Sherwood, wasn't the most immediately encouraging of signings. His appearance in an FA Cup final defeat for Watford had marked his card as a keeper who could be bullied on crosses. The ragged moustache gave him a dolorous air, like someone's uncle pressed into playing when he'd rather be sat in a deckchair, smoking his pipe. Nevertheless, Sherwood proved himself a brilliant last-ditch shot-stopper, at his best when we needed him most. North's goal at Wigan would not have been enough except that Sherwood, in the same game, saved a penalty.

After that first-minute Aldershot goal, Sherwood could have sat in a deckchair. Stirred but not shaken, Town pressed, creating and missing three or four clear chances. It was not a day for remembering the action in any detail, but North equalised in the first half, and at half time it felt like we were on our way to a win. Results elsewhere were going our way, so one more goal and we were safe. The momentum was with us.

Enough ink has been spilt over McGarvey. Let us just say that he was a legend in his own hairstyle

But failing to maintain momentum had been the story of the season. I'd moved to London from Wales that season, and saw five games. They represented our fortunes in a microcosm.

We lost 3-2 at Aldershot, pulling a goal back after Scott McGarvey was sent off. Players seldom make lasting names for themselves in struggling teams – McDermott, Jobling, Cunnington and even North and Sherwood we remember for what they did later – unless it is a bad name.

Enough ink has been spilt over McGarvey. Let us just say that he was a legend in his own hairstyle, the wrong player in the wrong place. His Town career ended when he was carried off during a 0-0 draw at Brighton. He'd been on the receiving end of a tackle so horrible that we were halfway back to London before one of us had the bad taste to admit: "Well, at least it was McGarvey."

Brighton finished the season in second, so that 0-0 was a very creditable result. So was a 1-1 draw at Gillingham. Against Brentford, Jobling, in his second game for the club, opened the scoring with a measured shot into the top corner from just inside the penalty area. We won 2-0, setting us up nicely for our next match, a six-pointer at Southend. We drew 0-0. Not bad, but not good enough.

Five games, three draws, and decent results against good teams offset by points dropped against relegation rivals; and not many goals, for or against. Only two teams in the division had scored fewer goals than the Mariners, but there were teams in the promotion play-offs who had let in more. 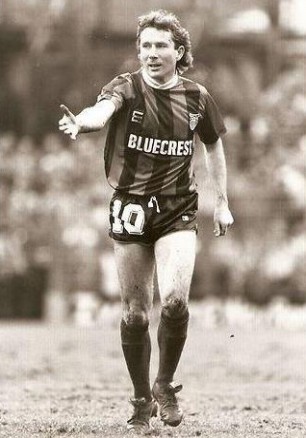 That was not just down to Sherwood. Rarely was a cliché more apt than to say Donal O'Riordan was at the heart of our defence. Players seldom make lasting reputations in struggling teams, but O'Riordan deserves to be an exception. He looked what he was: a craggy, determined obstacle to opposition forwards, a fulcrum who made us hard to beat.

Roberts had converted O'Riordan to play at the back that season, but perhaps we lost something in midfield as a result. Now, re-starting against Aldershot, we needed something or someone to ensure that just this once when there would be no second chance we could keep up the pressure. The second half seemed more even than the first.

Certainly our big chance came from a break. A Town player – North, again? – sprinted into the penalty area, the ball at his feet, only the goalkeeper to beat. His heels clipped, he fell. The pause while the referee trotted up was no doubt tiny but the wait until he pointed to the penalty spot was stretched with suspense.

Time froze. Freezing is when you are so anxious not to do the wrong thing that you are incapable of doing the right thing. Marc North was certainly anxious not to miss the target. He placed his penalty, so gently that Rob McIlveen later wrote that you could see the maker's name on the ball. It bobbled two yards to the goalie's right, allowing him to slump down and gather it to his chest. Amid so much I've forgotten, I see him looking back up at North, an expression of surprise, relief and apology on his face, like the stallholder at a coconut shy, unable to award a prize.

I'd missed out on seeing Town in the second division and now we were back in the fourth. It felt like something was irrevocably lostIt was a season that began in shambles and ended in heroic failure. A low cross whistled across goal, needing just a touch to send it in. At the far post, at full stretch, someone could not quite make contact. The game ended 1-1 and Town, with 50 points, were relegated. O'Riordan left the pitch in tears, that rock of a man finally broken. Players on the losing side hate to be named man of the match, they say. O'Riordan was named in the third division team of the year.

A swarm of Town fans invaded the pitch, halted by a line of police below the away supporters in the Harrington Street corner. The stadium announcer, his voice choking, apologised to the Aldershot fans and confirmed to them that they were safe. Two days later Bobby Roberts, assured by the board that whatever the result he'd keep his job, was sacked.

Living in Wales, I'd missed out on seeing Town in the second division and now we were back in the fourth. I missed my connection back to London and had a long night to dwell on it in the waiting room at Grantham station. It felt like something was irrevocably lost.

Soon after, we appointed Alan Buckley to replace Roberts, but that is another story. It is also only part of the story. Ron Ramsden's chairmanship had reached its inevitable conclusion when the existence of the club was threatened by an unpaid VAT bill. Action 88 was formed to raise the money to keep the club going and Peter Furneaux took over from Ramsden. With a chairman who knew that Grimsby Town were a football club first and foremost, and that his first duty was to make sure the manager had whatever he needed to bring success on the field, the foundations were laid to restore the Mariners' fortunes.

Send your comments on this article through the feedback page