A springtime evening in Aldershot. A setting sun behind the goal to the left. It's far better to come here on a Tuesday evening in April than a Saturday afternoon in November. Tony was still getting over Friday night so there was some squad rotation in match reporters.

Aldershot announced early bird discounted season ticket prices for next year. Barely a thousand home supporters could be bothered to turn out. They know where they'll be next season. They couldn't even find a mascot of their own, but fortunately an eight-year-old from Cleethorpes turned out and showed some good skills in front of the stand with some of the Aldershot juniors. 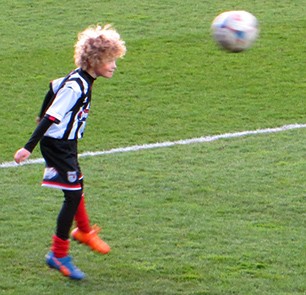 Town turned out in monochrome colours ditching red socks for white to avoid a clash of colours. Around 250 away supporters climbed the hill and made their way down the steps. A Town fan I had met at a match in Harlow had given up his GTFC jacket but still recognised me on the way down. Would it be worth the journey after Friday night's debacle? Surely things could only get better?

Town lined up as you might have expected with McKeown; Tait, Toto, Gowling, Robertson; Arnold, Disley, Nolan, Monkhouse; Amond and Hoban. On the bench were Pearson, Clay, Pittman, Bogle and Stewart.

Hoban had heavy strapping on his thigh.

Town kicked off and for five minutes or so it was quite a bright start. Nolan made his forward runs from midfield and won a series of three corners until Hoban hit the side netting. At the other end McKeown made a decent save. Then it all went quiet. Town spent time practising back-passing and knocking the ball about until they gave the ball away. It was lethargy personified.

I'd heard that Hurst was reluctant to play Stewart because he's not had time to play with the team and hasn't got the idea of how the others play. On the evidence of the first 30 minutes you could say this wouldn't make any difference, because everyone in black and white looked uninterested and disconnected. It was as if 0-0 would suit everyone. If it looks like a 0-0 draw, and everyone plays like they'd be happy with a 0-0 draw, you can see where it's going to end up.

Fortunately, there was a packet of Club biscuits to compensate for the boredom. It was that exciting. Did you know there are eight Club biscuits in each pack? That's four for you and four for me. How long can I wait to have the second one?

Someone hit a curling ball out to Arnold, who cut the ball back to Amond, perfectly placed to score. He scuffed the shot. Even the Irish assassin couldn't make it happen.

What else? There was a decent scuffle as the stewards made a mess of ejecting someone, which attracted more interest than the game. Stewart warmed up on the far side. Hoban ran around without effect. The strike force had a blunt edge. Hoban reminds me of Tomlinson, who I've tried to forget since the Braintree match.

On 30 minutes the referee awarded a free kick just outside the box against Disley for what appeared to be no good reason. It was a bit like the Cheltenham free kick against Pearson.  Thinking about it, it's in roughly the same place too. But never mind – they only have one guy over the ball, and surely this time the wall will jump? It did. Aldershot's Walker didn't bother with subtlety and just hit the ball hard. It deflected past McKeown off someone's head. The Friday script was re-running.

Cue disintegration on our part. Apart from Richard Tait, who never lacks intent, you'd have thought the rest of the side had never met each other, let alone played together. It's not just that the playing styles of Hoban and Amond are mismatched – Hoban seems to turn Amond into a bit-part player. You know how we've all wondered why Morecambe and Accrington were daft enough to let him go? Well, when you see him partnered with Hoban, you can see why.

So on 43 minutes it wasn't surprising that Aldershot scored again. The name of the scorer escapes me. It must have been a shock to their supporters, who've seen them lose 1-0 to Barrow, 8-2 to Chester and 4-0 to Altrincham. When was the last time they were 2-0 up at home at half time?

So Town were booed off at the end of the first half. They had been dreadful, on a par with the worst of the performances that saw us relegated. Shall we end it there? Enough said?

"I thought attack was supposed to be the best form of defence?"

"We've got too many small players and they're all big blokes. Bogle has to come on"

Tony: "What do you think will happen in the second half?"
Me: "We'll either we'll crumble and concede two more or we'll turn it around and win 5-2"

It took very little time for it to become obvious that it had been the right thing to do. Tait showed even more intent than he had in the first half. Just over five minutes after the restart Bogle got away at pace down the left and got to the bye-line. Think Lincoln or think Welling if you were there. He crossed to the far post where Amond silently thrust a dagger between the ribs of the Aldershot defence and headed into the net. 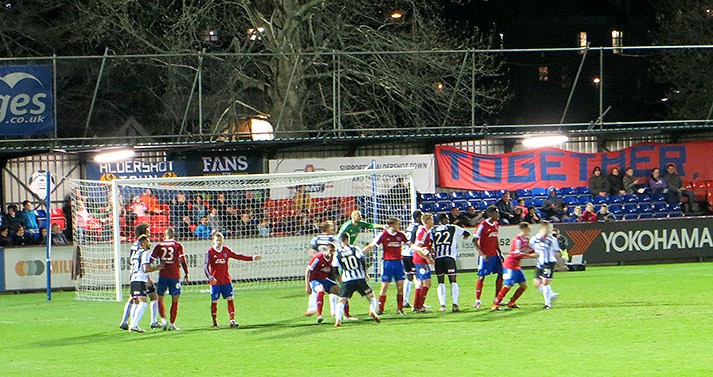 Whatever had made Aldershot's defence seem impregnable expired swiftly and without a squeak. No mark was left where it fell because it dissolved into dust and dispersed in the cool night breeze. In the second half they became as shambolic in defence as we had been in the first.

Two minutes later the same thing happened again, only this time Arnold turned provider to Bogle, who firmly directed the ball into the same place. Two attempts, two goals, too easy.  Morale among the Town fans went through the roof whil the Aldershot supporters were stunned by the speed at which their script unravelled.

There followed ten minutes of robust exchanges in midfield. Disley got booked for another of his robust midfield tackles and Aldershot players danced across the front of our penalty area before shooting just wide of the post. We had our first glimpse of Jordan Stewart, who showed pace and real ball control. Those YouTube videos showed what he is capable of – this is what Peter Bore could have been like.

Then the referee finally awarded Town the free kick they deserved out on our right. It's fair to say that he had shown a degree of reluctance to penalise Aldershot up to then but things were about to change. This time Nolan delivered a ball which ran through the penalty area for Arnold to unsubtly smash the ball into the net. Three-two and the Town faithful were in raptures – only 20 minutes earlier 2-2 had seemed a far-off dream.

But it didn't last long. Aldershot came back at us and Toto made a weak defensive header which only reached Aldershot's Browne, who took one touch and placed the ball into the left corner of the net. Aldershot had warmed up practising shots exactly like this before kick-off and it was a well-taken goal. McKeown spent a long time face down on the pitch contemplating what had just happened but there wasn't too much he could have done about it.

Another blood-and-guts ten minutes followed. Tait was upended in full flight by Aldershot's Beckles, who was lucky only to get a yellow card for what appeared to be a very high and very dangerous tackle. Walker followed soon after for a foul on Nolan.

But you don't want to hear about that, for this is what followed. 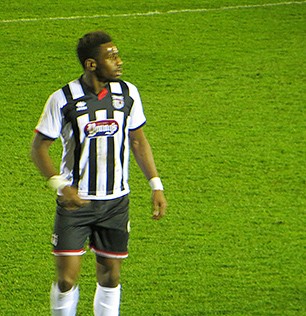 Remember that the choice was to watch the Champions League quarter-final or to watch Town take on Aldershot.

So in the 88th minute Bogle laid the ball out to Nolan on the left of their penalty box. Nolan seems to prefer his right foot and simply chipped the ball upwards towards the goal with the outside of his right boot. It flew over everyone and dropped inside the top right corner of the goal. Cynics will say he mis-hit a cross, but at the time it looked pretty intentional. It was simply stunning. If Suarez had done the same you'd have seen it on every Sky bulletin for the rest of the year and if it had been in the Premiership, Lineker and Shearer would have been putting it forward for Goal of the Season on MoTD.

We played out the five minutes of added time mainly in the Aldershot half, although the Town supporters were calling for a fifth goal. At the whistle the response of the fans was the exact opposite of the first half. Everyone stood and applauded the team off and the players were exuberant. Gowling walked towards the standing area beating his chest. Hurst embraced Bogle. It would have gone on for a long time if the players hadn't left the field.

What does it tell us? Above all that Bogle and Amond go together like haddock and chips, whereas Hoban and Amond match up like steak with white wine. Striking partnerships need both parties, like Vardy and Mahrez, Toshack and Keegan – or Tees and Green. It's not rocket science to know who we should be starting with on Saturday.