Hey, you must remember Cambridge Rules. This is the true home of football.

A bright day of pleasantness and pleasantries by Coldham's Brook with 1,100 Townites passing by and queueing for the single pie on offer. For fans may come and fans may go but Town fans queuing for a pie go on forever. Waffle? No, pies. You get waffles with syrup in the Ponceyship.

Town lined up in red in a 4-various-variations-of-5-in-the-middlish-1 formation as follows: McKeown, Mills, Gowling, Collins, Andrew, Jackson, Comely, Summerfield, Berrett, Vose and Bogle. The substitutes were Henderson, Pearson, Disley, Bolawinra, Browne, Tuton and Vernon. Who's been watching That England then? Comley and Summerfield stood in front of the defence with Jackson way out right, Vose way out left, and Berrett in the Kingsley Black Memorial Hole for neither fish nor fowl.

Yes, each player was allotted an area of the field and played as part of a team in a game that was based upon passing. Let's keep us shape – we're the Smothers Brothers of the fourth. 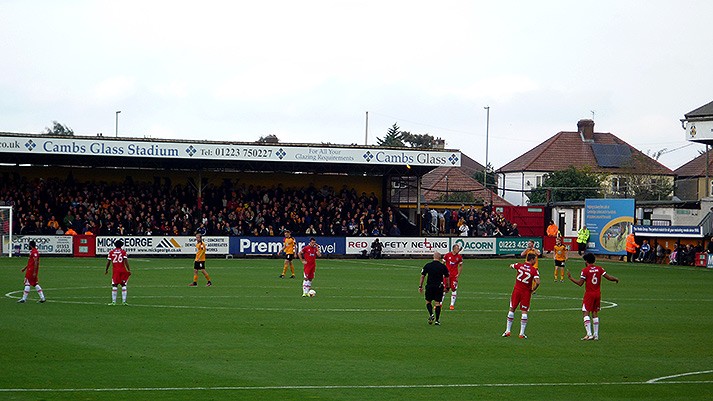 First half: Something else

The Amberites kicked off away from the raucous bobbers from the north. Nope, let's try again. A false start, then a wasted start as they simply chipped their potatoes into the deep fat fryer stand.

We're nodding off as the game plodded off at a tantric tempo. I can't tell you what didn't happen. Just skip on about 15 minutes for the sake of sanity. They may have tried to cross the ball once. Zak! Mills has a long throw. There are nine zillion bicycles in Cambridge, that's a fact, and all with baskets and bells that ring and things to make them look good.

Zak! zithered and slithered along the right, swishing lowly and back to the lonely Summerfield. And who can really say that the result was of relevance to the world? A big block of local cheese got in the way.

A newly bearded man of raffish tastes ate a big block of cheese to keep his mind from wandering. The ball, where will it go? Town's fluid five filled the cracks that ran through this bore and kept Cambridge from wandering through. Shape-keepers of the world unite – you alone know what is right in modern football.

I woke up, suddenly I just woke up to something happening. This, this next thing, you see, was a thing that actually happened in reality. It wasn't a cheesy dream.

Amber clambering and eventually crossing deeply. A man arose above Andrew to loople back into the centre. Gowling stretchy-sliced onto Berry's chest and Jamie Mack flew out to sprawl-kick away from near his far post. To release the pressure we just need Brad Halliday on the ball. Their alleged right-back is wonderful, so many slapstick tricks, so many ways of falling over and missing the ball and the point of football.

And Cambridge's response? You tell me. I didn't see one. They were soaked into our sponge.

A big punty wallop down the right and Omar sliced and diced some bendy carrots, back-stepping and slip-sliding wide as an Amber boot finally emerged from the fug. Wot no corner? No, no corner.

Cambridge? Hey, do we care?

Andrew ambled past the remains of the remnants of a Fenland carpet shop and carefully clipped lowishly to the awaiting Bogle. Oh Omar, caught between two thousand different thoughts, steered softly over the bar.

Locals fly-fishing for compliments. You won't get any.

Omar was felled by a mystery lone gunman but arose from his deathbed to brush aside all comers. A look, a glance and a lovely lifting lullaby drifted over the wall and onto the angle of post and bar.

A minute was added and Town, as usual, sat down for tea far too early. Amber punting and shunting slowly, slowly edged the red wedge back towards Jamie Mack. And with the last kick of the half Dunk arose above Mills and headed against the post. The ball boombled back into the centre and Dunne confirmed what an air-shot he is.

Slap your thighs me hearties, it's been a doddle.

Neither team made any changes at half time.

Cambridge upped their ante and upped their pace. Town kept us shape. Mostly. Bellows wheezed and Mills blocked a cross with some part of his anatomy or other. I'm no doctor but you have to hand it to Zak! – he got in the way when it mattered.

Yup, here we go again, the squeezebox chuntered and Zak! hovered above the turf and hoovered up an imminent Dunking. Moments happened, then stopped happening. Then happened again. McKeown had clean hands and clean knees.

An amber fall and a free kick, dead centre 20 yards out, Jamie Mack shuffled his pack and Berry wibbled a slow dribble inchlets past the left post, with McKeown nonchalantly waving traffic through.

Ups were undered, wellies were plundered and waves of thisness and thatness. All we are saying is, don't give them a chance. And so we did. Ministers, sinisters, banisters and canisters this way and that, and a dink from their right was headed back from their left, straight down into the centre of the six-yard area. McKeown ached left and McGurk marvellously cleared off the line and over the bar. A heroic, impossible clearance which defied logic and proportion. A magnificent miss. Who said there were no more heroes any more?

Berrett touched a weeble, who wobbled and fell down, dead centre, 20 yards out. McGurk, the magnificent missing machine, chipped into the dead zone twixt fan and goal.

Oh, yeah. The Dizzermeister's 600th game this year and all that. Jolly well done, old man

Town, as normal, subsided into passivity. Long before normal the Short One exchanged Comley and Jackson for Disley and Tombola. Within a nanosecond something happened. A throw-in chuckled shortly and tapped around. Berrett walled a pass and Tombola bust through the defence and slapped into the crowd, causing a hundred Fenland faces to gawp and duck.

Oh, yeah. The Dizzermeister's 600th game this year and all that. Jolly well done, old man.

Omar befuddled with bewitching feet way out on the right, spun infield and carefully caressed lowly through the jungle. The keeper smuggled aside and, well, you better watch out, you better take care, the roof is leaking. I'm sure that the rivets are bouncing open in time with the crowd.

Leon Legge has a wooden leg. Chasing an aimless squitch on the left, he passed the ball back to the keeper in a dream. Omar pounced, rounded the pink panther and passed straight to the sliding Roberts. Now then Leon Legge, you must be thankful to him, have another drop of gin to calm the nerves.

Wellies and wallops, here they come. Boom, boom, boom, piffle. What have they got to show for all that jazz? A free kick flapped and a big yellow toe-poke took the ball away from goal.

As four minutes were added, Tuton the tractor replaced Vose, who eventually managed to leave the pitch, his legs moving quicker the slower he trotted. The referee didn't book him, for he recognised this is simply how Vose moves normally – a mesmerising meander in ever-decreasing circles.

They wellied and walloped and a big booming up and under bonked off an amber head and bedribbled across the face of goal and wide with no amber amblers approaching. Relax, you just needed some basic facts to show you where it hurt the locals. Last kick, last chance, a corner cleared and off we jolly well jigged.

McKeown's hands were clean. He didn't make a save, just a fly-kick, a couple of hacks and a dropped cross. Town's comfort blanket was enough to smother the latest set of mid-tablers to knock timidly upon our door.

Right on, comrades – Red Wedge is back!