What if… George Tweedy had not had flu

This story was first published in the 1969 World Soccer Annual 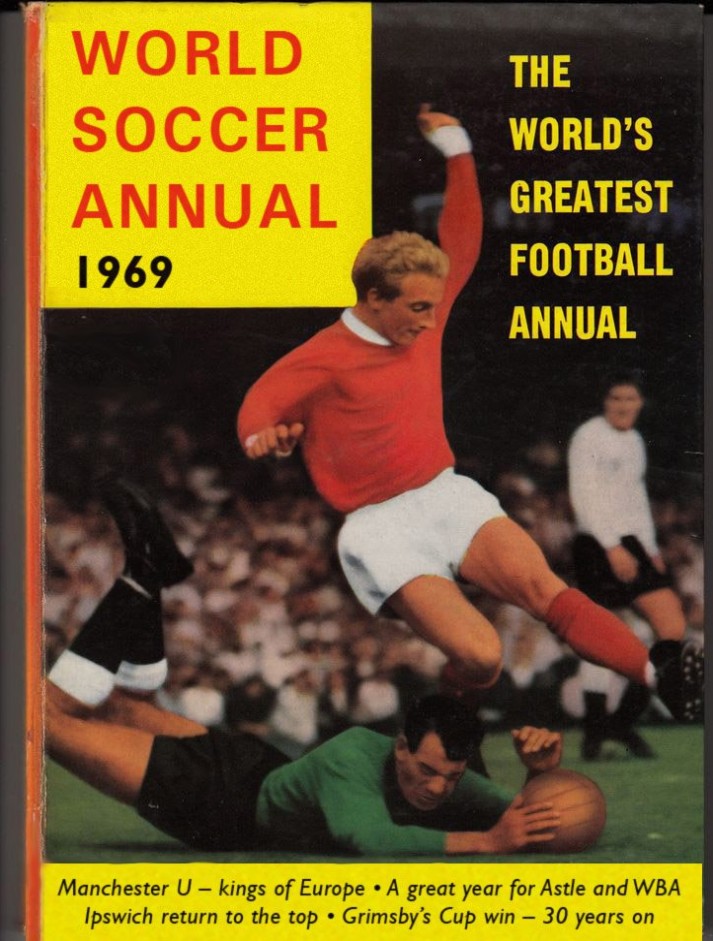 "What team were FA Cup holders for eight years, but only won one final?"

The answer – Grimsby Town – is all the more surprising to the young football fan. The Fishermen now play in Division Four, but in the 1930s they were admired members of the first division. The team that won the 1939 FA Cup featured three internationals: England's Harry Betmead and George Tweedy, and Ernest 'Pat' Glover of Wales. Two of those famous players would almost miss the biggest games of the campaign. 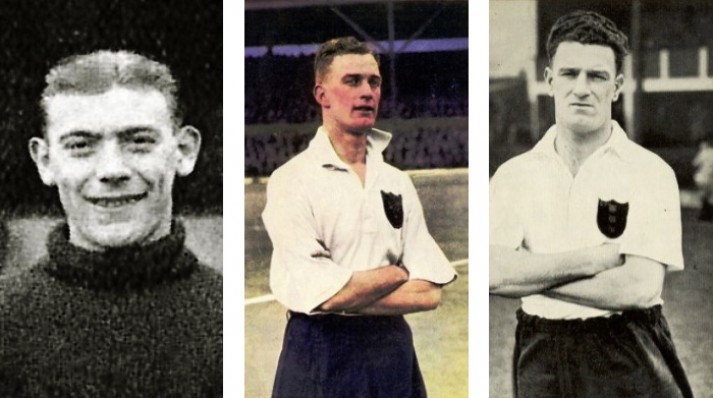 Escape from the Lions' Den

Grimsby reached the semi-finals after beating three teams from Division Two – Tranmere, Millwall and Sheffield United – and then Chelsea in the sixth round. They needed replays to get past the Lions and the Blades. Indeed only two late goals at Millwall's Den rescued a draw.

In the semi-final, played at Manchester United, the Fishermen faced Wolverhampton Wanderers. Wolves, riding high in the league, hoped to become the first team this century to do the 'Double'. They were firm favourites, especially when news spread that Grimsby goalkeeper George Tweedy had flu.

Just what the doctor ordered

Tweedy's deputy, George Moulson, had never appeared for the Trawlermen. It would have been a nerve-wracking debut facing the hungry Wolves in a Cup semi-final. Luckily, after several days of secret treatment, Tweedy pronounced himself fit. Moulson, instead of playing, added to the crowd of 76,963, a record gate for Old Trafford.

Tweedy showed his importance to Grimsby after 20 minutes. Wolves' centre-forward Dick Dorsett was advancing on a loose ball and Tweedy had to be quick off his line to snatch it from danger. Not only that, he immediately hurled the ball to wing-half Ted Buck, who released Jimmy Boyd on the right wing. Freddie Howe's header from Boyd's cross was parried but Jock Beattie scored from the rebound. 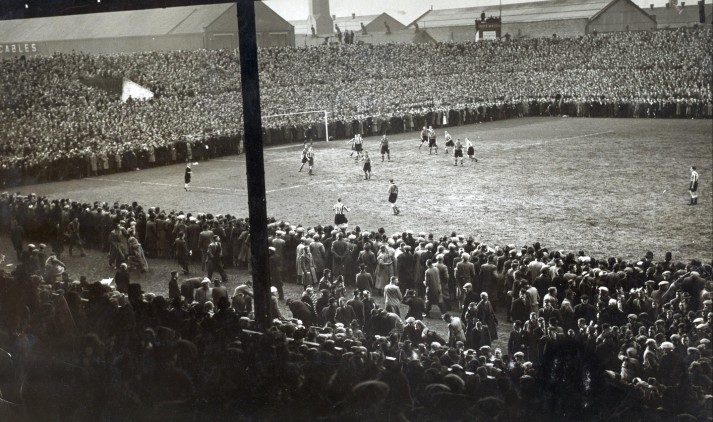 Semi-final action: Wolves at bay as fans throng the touchline

Harry Betmead, up against Stan Cullis, his centre-half rival for an England place, was at his imperious best that afternoon. One tackle on Dorsett left the Wolves' player spread-eagled and drew gasps and applause from the supporters thronging the touchline. With the Wolves at bay, a second half goal by Howe made sure that, for the first time in their history, Grimsby Town would compete in the FA Cup final.

As for Wolves, knocked out of the Cup, they also lost out on the league championship. Their manager Major Buckley was notorious for giving his players monkey glands to improve their strength and stamina. Perhaps he'd have done better to give them George Tweedy's flu treatment!

The Fish and Ships Final

The final, against Portsmouth, was soon nicknamed the Fish and Ships Cup, but the cost of a fried treat soared in the week before the big game. Cod and haddock were scarce with so many Grimsby trawlermen on land to make sure they did not miss their day at the Empire Stadium. 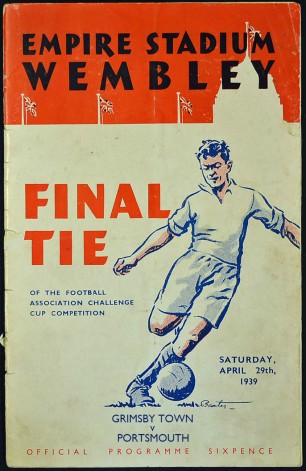 When 29 April - cup final day - finally arrived, Grimsby and the neighbouring seaside town of Cleethorpes were almost deserted. One wag left a placard on Cleethorpes promenade asking "If you aren't going to Wembley, please feed the donkeys!"

A headache for the manager

After the worries about Tweedy before the semi-final, Grimsby manager Charles Spencer had another headache for the final. Centre-forward Freddie Howe had scored seven goals to get the Fishermen to the final but he'd only scored twice after the semi-final. Meanwhile, Pat Glover had played and scored for Wales even as Howe kept him out of the Grimsby team. Two goals by Glover against league champions Everton in the last game of the season settled the matter. The experienced Welshman was picked for the final.

Spencer's faith was soon rewarded. Just 10 minutes had been played when Glover took a pass from inside left Tom Jones, beat his man and opened the scoring, slipping the ball past Harry Walker in the Pompey goal.

For the rest of the first half, Portsmouth pressed hard, but chances were few and far between against the Seasiders' famous half back line of Alec 'Ginger' Hall, Harry Betmead and Ted Buck. Pompey relied on early crosses and long-range shots, all handled confidently by Tweedy.

Calamity, then a Cup final first

With Grimsby holding out so comfortably, the match might have been soon forgotten but for a calamity followed by a unique Cup final moment. First, Pompey's Cliff Parker took advantage of a mis-hit pass back to shoot past Tweedy and level the scores. With the Fishermen still reeling, the referee spotted a ball strike Betmead on the arm and awarded a penalty. Having led five minutes earlier, the boys from Blundell Park now faced going 2-1 down.

Portsmouth's John Anderson ran up confidently and hit the spot kick hard to his left, but George Tweedy dived and punched the ball past the post for a corner kick. To this day, the Grimsby keeper is the only man to have saved a penalty in an FA Cup final.*

With both sides now searching for a winning goal, the match became a breathless, end-to-end affair. A thunderbolt shot from Fred Crack cannoned off the crossbar of the Portsmouth goal. Grimsby too were saved by the woodwork when Tweedy pushed an Anderson header onto the post.

With two minutes remaining, both sides might have been forgiven for looking ahead to a replay. But Pat Glover had other ideas! From a corner, he pounced on a clearance and hooked the ball home from close range. 2-1 to Grimsby. Could the Cup really be on its way to Lincolnshire?

There was still time for one more goal though. With just injury time to play, Portsmouth pushed forward desperately. On the edge of the Grimsby penalty area, the captain, Hall, made a crunching challenge. The ball ran to Betmead who saw Glover unmarked on the halfway line. A huge kick downfield allowed the tall forward to run into open space and smash the ball past Walker.

With the last kick of the game, the Welshman had completed his hat-trick and confirmed that Grimsby Town were the English Cup champions. It was his 200th and last goal for the club. What a way to end a famous career!

Cheers out at sea

Fans rushed onto the field to chair all 11 Grimsby heroes around the pitch. It's said that the cheers when Ginger Hall lifted the FA Cup could have been heard from the North Sea. Just in case they were not, after warning sailors of the storms at sea, that night's shipping forecast broke with tradition to end with the announcement that "Grimsby Town have won the Football Association Cup."

Gathering war clouds finally cut the next season short and when League football returned after World War Two, the Fishermen were no longer the team they had been in the 1930s. But they had fine memories to look back on. Grimsby Town might only have won the FA Cup once, but they could cherish it for eight long years.

*Since this article was published, the future Grimsby goalkeeper Dave Beasant saved a penalty for Wimbledon in the 1988 FA Cup final.

Words by Pat Bell; artwork by Peter Anderson and Pete Green. The reproduced pictures used with this article are courtesy of Grimsby Town FC. With thanks also to Rich Mills and Mark Shephard.

What tales have your parents or grandparents told you Grimsby's remarkable FA Cup victory? Or were you even there yourself? Tell us about it