Give it to Gary

They played in the same school team, and then Gary Lund moved on to be a professional footballer, then moved on again. Tony remembers an old school friend

Havelock school team in 1980. Gary Lund is second from right in the back row; Tony Butcher first left at the front. Courtesy of the Grimsby Telegraph

I remember the first time we crossed paths. There he was, stood opposite me and Paul Wardle in the school team football trials as Mr Mumby put us through a basic three-man rotational pass and movement routine. Who is that lad in the red and black stripes with his hands down the back of his shorts?

Neither of us knew. He just looked different. He stood like a footballer. No matter where we shinned the ball this curious creature calmly swayed, trapped and perfectly caressed it back.

His recent interview on Radio Humberside was a reminder that I knew a footballer once. He stopped playing nearly 25 years ago, so I know an ex-footballer. I also know ex-shop workers, ex-teachers, ex-a-lot-of-things. Rather, I knew someone who became a footballer.

How the heck did I get in the school team if that was the standard? Well, luckily, that wasn't the bog standard, that was top of the local talent shop. It helped that no-one else but us were left-footed.

Ah, I can still hear Mr Todd barking out the last orders before every game: "Give it to Gary!" I did and won a man-of-the-match award in a basketball tournament for doing just that, and only that, for 20 minutes. Virtue had its reward in those days. It's still on my parents' mantelpiece 40-odd years later.

It was amusing to hear Gary on Sportstalk say that he was a late developer, and that it wasn't until he moved to being a striker that he blossomed. He was being far too modest, and following that logic he owes his professional career to that steady flow of wayward crosses and bumbled passes from his wingers, especially from the left, of course. Even I don't believe that.

Anecdotes about life in the fast lane? Not his style. He never talked about work and we never really asked. Tittle-tattle about someone's workplace is always dull to others, and that's what it was in those days. It should be these days too Yes, we were lucky in having Gary Lund in our team. Quiet, unassuming and superior to anything anyone else had, he had a natural instinctive poise and balance. Sometimes you can just tell, straight away. Wilkie at Toll Bar? Just a runner and better at cricket. Dave Topliss at Wintringham? Mmm, maybe. That lad called Pete at Chelly? A bit moody.

Gary will have forgotten his most memorable goal. No, not that marvellous swaying swoosh through Man City's defence. Nope, not the hooking half-bicycle kick against Arsenal either. It's obviously that one against Lindsey in 1980. Graham Pearce kicked off, Lundy flipped the ball up, volleyed it back, and it bounced over Paul Leroy and straight in. Four seconds. No-one else on the pitch had moved. Oh how no-one laughed at the time.

Or was it against Matthew Humberstone? How quickly one forgets the important details of life. 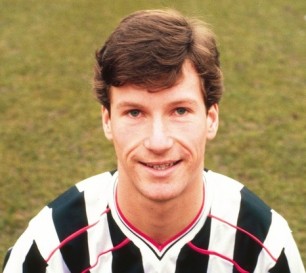 Anecdotes about life in the fast lane? Not his style. He never talked about work and we never really asked. Why would we? We knew him, not the public figure. Tittle-tattle about someone's workplace is always dull to others, and that's what it was in those days. It should be these days too.

Yes, Gary Lund, the great lost Town player criminally misused by managers, as he had the misfortune to play in the era of lumpen lumping. Too young to remember, or simply forgotten? He was a proto-Sheringham and would have been perfect in Buckley’s teams.

He did finally let on he was really, really unhappy with the way he was being treated, and with Lyons's competence in general. At one point thick Mick wanted him to be bigger and quicker, so he was sent off for specialist sprint training. Lundy came back slower.

The only other incident he ever talked about was when Kevin Kilmore reversed into his girlfriend's bike. Judith was still miffed at that the last time we met them. And that's the sum total of life in the fast lane. Footballers are humans, doing their job. Their life isn't just balls and banter.

So what are my memories of Gary Lund, footballer? Evenings in the Barge, dodging glasses in the Smugglers, crappy, scrappy school football and basketball and cricket. A towering header in Louth, a pass and stare at Toll Bar, and walking back from Baz Rippon's chemistry class as Lundy did an impression of Tracy Green's walk (a rare flash of public humour), and... well, a dozen small memories of an old school friend.

You gotta give it to Gary now too. He's moved on and refused to wallow in his past. A lesson for us all.

Our grateful thanks to the Grimsby Telegraph and Grimsby Town FC for providing and allowing us to publish the photographs used.

Send your feedback on this article