Paul Thundercliffe has been a Town fan longer than a Cropper long throw. Growing up on the West Marsh and being mesmerised by the Buckley Boys of the early nineties hooked this young Mariner, who lived through university seeing Bonetti from afar before finally settling back in the town and seeing the stripes yo-yo between leagues. Forever grateful to Cod Almighty for the way in to write Alan's book, Paul teaches the youth of South Yorkshire on the correct use of 'spoggy' and 'bealing' and enjoys the smell and taste of the Lower Findus on matchdays. 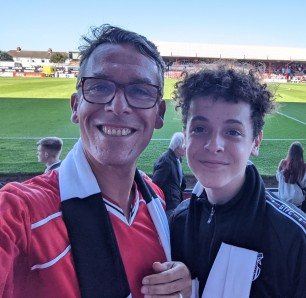 Inherited from my dad, who used to drip feed us to games in the mid-eighties before our first season tickets aged 14 in 1989 just as the renaissance of the club under Buckley was gathering momentum. Things are now full circle – I buy my dad's season ticket and we sit with my son in the Lower Findus.

Where was your first seat/standing position and where do you like to sit now?
My first game was standing on a crate in the Constitutional corner with my dad, aged six. We used to go in the Osmond corner after that but my first season ticket was in the Pontoon. On returning from London, I chose the Upper Findus but now I love the smell and sounds of the Lower – three rows back. You can taste the banality of some of the football.

New ground or redevelopment of Blundell Park?
We have to stay. It's our home, it suits us, it fits us. I don't buy the obsession with the parking or if they build it they will come. Truth is, an out-of-town development will just have a congested car park and you can't get better transport links than six buses an hour – maybe create a station outside the ground? But no, home is where the heart is.

Steve Meek, infamously, once helped John Shelton Fenty erect a gazebo. Have you got a John Fenty moment?
We shared a urinal at Rochdale. And also Dagenham, come to think of it.

How did you get involved with Cod Almighty?
I was a prolific You Have Your Say contributor as a teenager that then morphed into writing for SWWF, so it was a natural progression. I enjoyed the freedom it gave me to express how it felt to be an actual Town fan in my late twenties and hopefully was a little more considered in my forties.

Have you ever exchanged words with Alan Buckley?
I'm lucky – and grateful – that my Cod Almighty exploits helped me get the Buckley book gig. I cannot begin to express how it felt essentially sharing time and stories with a hero and then that hero being everything you want and expect him to be.

He's a thoughtful, considered, intelligent man and this club were very lucky to have him. Genuinely, had we not appointed him I think we would be a pale shadow of ourselves. Think about it – three promotions, three Wembleys and the football and players that will live in the memory for ever. The fact he's only got a boardroom named after him is frankly scandalous.

The best part of doing the book was him realising how much the fans adored him. I think he knew the Walsall fans did - and let me tell you, there are thousands of 45-year old 'Alans' because of him - but the reception he got from doing the book at Town really did mean a lot to him.

Favourite Tony Butcherisms from the million words of woe
What I genuinely look for is if Tony has seen the same game as me. Invariably he does and although I cannot get across how shit the ref is so eloquently, the fact we are never far apart in our summaries is good with me.

Have you got any Cod Almighty T-shirts?
I had the I HEART GY one and wore it along with three mates - we looked like a desperate stag do. I gave my Macca one to the original (and still the best) Macca, who kindly wore it when I interviewed him.

Where have you been the most miserable when following Town?
When I first moved away to Cardiff as student I didn't cope very well, with just teletext and weekly cuttings from home. The hardest was genuinely during the pandemic – you don't realise just what football means until it doesn't exist or you can't go. Those iFollow games were torturous and an absolute metaphor for a disastrous season.

And what's the high point?
Definitely some genuine highs along the way - all the big games immediately spring to mind, but there's nothing better than being part of a seething away mass, celebrating a goal. Livvo against Rotherham, Disley against Barnet but my all-time favourite is Jevons against Coventry. Unreal moment as that ball looped in - even better when the local sports paper had us top of the league because of a late result. Magic.

Which player do you love and why?
Dave Gilbert will always be my favourite player. Skilful, creative, lethal. There was never any doubt about his ability to change games, score goals and deliver a killer pass. The expectation level was unreal. Also, if you watch old clips of games he's in his own world - often failing to notice the ball's gone in. I'm pretty sure it's a goal against Scunny - Cockerill - and Gilbert just stands there and after about five seconds, raises his hands.

What or who did you get wrong?
I used to give Kevin Jobling stick when I wrote for SWWF because, ultimately, he wasn't John McDermott or John Cockerill. As a utility player, Jobling filled in and, in hindsight, did an excellent job. I suppose he was damned by those around him but I'd take a Jobbers in a Town team any day of the week these days.

If you could turn back time?
I wouldn't have rolled my eyes at another Tony Rees backheel.

Favourite John Moore or Rolyism?
Loads – Roly: "What 'as Alan Buckley got in 'is pocket?!?" John: "He does do!"

I'm fortunate to have commentated with both and, reassuringly, they are both exactly the same in person. In fact, I got a lift from John the other week and he used the word 'crikey' three times in two minutes about non-football related matters.

What's your favourite Town kit?
Hobott. 1984. Classic. I used to enjoy designing and drawing kits as a young nerd but for me this was the prototype – stripes the right size, also on the back, subtle red lines. Perfection.

Whilst we are on kits, a little bugbear: blank backs. Never understood why it's more important for the name and number than the stripes. Completely ruins who we actually are from the back.

Have you ever played football with, or against, any Town player?
I’m pretty sure John McDermott and maybe some fringe Town players came onto the Bully (Duke of York gardens) one summer and we had a kickabout, which is actually ridiculous when you think about it.

Are you a forgiving soul? What is the longest Town-related grudge you hold?
Brian Hill. Bolton at home 1990. Outplaying them, Cunnington bursts through and despite the fact we all knew he was going to sky it, he's mercilessly scythed down. The linesman flags for the foul – for a long time – and wasn't even consulted. That defeat almost cost us promotion.

Have you infected anyone with the Town? How are they today?
My son's got a season ticket next to me. It took him a while and hundreds of bags of sweets but he's well into it now – starting to understand the game, the ebb and flow. He's not a football fan but he's a Town fan.

Are you bothered which division Town are in?
Honestly, the five-year return to the Football League was turgid at best. The churn of managers and players didn't help, but there were probably three genuinely decent games during that spell.

I want to enjoy an exciting game, players trying and winning more than we lose. If that meant staying in the Conference and losing in the play-offs every year, so be it.

Do you care about the national team?
No. Three fish not three lions.