Charlie Cross, also known as Mr Target Demographic Diary, is one of the newer members of the CA team, only writing his first article in October 2021. He's been attending Town games since his dad was able to convince his mum a baby would add to the atmosphere at Blundell Park, and a season ticket holder since the age of 10. As a player he is a right-back/right-wingback and recently won the Village Trophy with Saxilby Men's Team. 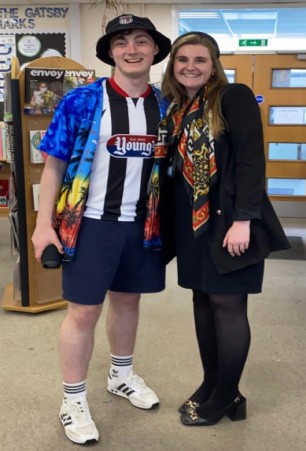 My dad, it's all his fault. He started taking me as soon as my mum would let him and since that point Grimsby has always been a part of my life through thick and thin.

What "should" be your team if you followed the family tree?
Well, it depends how far you want me to go back. The male side of my father's family as far as I can trace have always been Grimsby. However, the women in my family all support London clubs: my grandmother on my dad's side supported Crystal Palace, while my grandmother on my mum's side supports Bromley. My mum always supported Arsenal as a child through her father. With so many clubs I had my options open of who I wanted to choose. I was born in Lincoln so I could have even ended up supporting them. Heaven forbid.

Where was your first seating position and where do you like to sit now?
I've always sat in the Main Stand but I've been dotted around it. At first it was more towards the Pontoon side around row D. But now I'm a season ticket holder at the best seat in the house at P50, just behind where all the injured and reserve players sit.

How did you get involved with CA?
Once again, my dad. He's been an avid reader of the site for a long time and I've always said how much I enjoyed writing so when he saw there was an opening, he alerted me. I was brought onto the CA scene probably because of my age more than anything. Due to only being 18, I offer a more youthful view of Town that has only seen us play in the lows of the Conference and dizzy heights of the fourth division. I wrote my debut piece about my obscure 'legends' growing up and the rest is history.

Which Town manager have you found yourself near and where?
I once barged past Ian Holloway without realising it was him. Didn't even say sorry. Looking back, I'm glad of it.

Have you ever walked around Chapman's Pond?
I was unaware of what Chapmans Pond was before I read what was a very funny article. Of course, why would I? I'm not from Grimsby, but the idea of it being 'bottomless' does pose many questions. Perhaps the next time I'm at a Town game I'll take a detour and see this unrecognised wonder of the world myself.

Where have you been the most miserable when following Town?
Crewe. I hate the place. The away day there was the worst I've ever experienced. From my own Nando's-gate affair, to parking troubles, to losing 4-0 at half time. Horrible away day, I will not be returning.

What's your favourite Town kit?
1995/96 away shirt. Red and blue stripes with the Food Town sponsor by Diadora. I think it just looks fantastic.

Which player do you love and why?
Only one man for this. Liam Hearn, he's had my heart since I can remember watching Grimsby Town. Although we had a rough patch in the middle, there will never be a player I love more…unless John McAtee gets us promoted next season again!

Where's the oddest place you've bumped into a fellow Town fan?
The Tate Modern in London. I saw a bloke wearing a This Town Knows T-shirt with the dock tower in the middle.

Have you been up or inside the Dock Tower?
No never! I didn't even know you could do this! Something to add to my bucket list.

Did you ever call Clubcall? If so, where from?
I had to ask my dad what this meant…I'm not sure if this is even a thing anymore but no, I haven't. I typically just check BBC sport on my phone or the GTFC hashtag.

What or who did you get wrong?
Literally just last season I mocked Kyle Hudlin for the way he ran when he came on against us in the home leg against Solihull. He then scored two and won them the match. Was put in my place there.

When we find ourselves in times of trouble do you have you a secret second team that you turn to?
Not a chance, I bleed black and white. Grimsby till I die. Although Russell Slade did once make me not want to go to watch Grimsby. So I just gave my support to no one that day.

Have you infected anyone with the Town? How are they today?
Yes actually, multiple people. My former driving instructor now always messages me about the Grimsby results and my half-sister's headmaster. Most impressive, I feel, is a hardcore Sunderland fan who is a regular at the pub I work at. He now holds a soft spot for Grimsby, despite our main colours being black and white. Something he found it hard to get over, as you can imagine.

Are you bothered which division Town are in?
Yes, actually. I need Town to at least be in the fourth division every year so that we appear on FIFA. Otherwise, I have to use the create a club feature which is just never the same.

If you could turn back time?
I'd like to see Ivano Bonetti if I could, or watch Alan Buckley's team. Basically, I missed out on all these fantastic events in Town's history and I'd love to experience them.