In search of the Glover ball

Like many Grimbarians, I felt an enormous sense of pride in my football club when the Mariners Hub opened in Freshney Place. With little funding, the organisers did a wonderful job of displaying artefacts from bygone days that had visitors reminiscing about the good times and the bad we've experienced as Town supporters.

The Hub's crowning moment in its short life was when the Trust purchased the shirt worn by Jack Hodgson in the 1939 FA Cup semi-final, which they acquired from a seller on a well-known auction site. It came with other memorabilia, and took pride of place in a glass display cabinet and was looked at lovingly by everyone who saw it.

I certainly never thought I would be interested in, or get emotional about, an item of clothing (as anyone who knows my dress sense will testify), but there was something special about that shirt. What tales it would tell if it could speak! How did Jack Hodgson feel to walk out in front of what is still Old Trafford's record attendance of 76,962 (you knew I'd get that one in!) just one step from a historic first FA Cup Final for the Mariners? What emotions did he experience when he leant over Town's injured goalkeeper, perhaps recognising that the chance of reaching the final was disappearing before his eyes?

Those and lots of other questions went through my mind as I gazed in wonder at what was in front of me. I know it's not everybody's cup of tea, but this kind of memorabilia makes me misty-eyed and proud to be a Grimbarian. I like to think that in a hundred years time, someone will come across an ancient mobile telephone and charger, to discover a picture of a grandfather posing with a footballer apparently called John McAtee, both grinning from ear-to-ear, and wonder what that was all about.

So I was as delighted as everyone else when the Trust's efforts in establishing the Hub were rewarded with a National Lottery Heritage Fund grant of nearly £100,000 to take the Hub further and come up with something more permanent to celebrate the Mariners' achievements. Around the same time, I was doing some research for an article for the 'Goals Galore!' series I've been doing for this season's programme. One game that took my eye was when Town beat Sunderland 6-0 at Blundell Park in April 1937.

Back then, the Mariners were an established top flight team. Their opponents were the current league champions and had just reached Wembley to appear in their second FA Cup Final. For the match on Monday 12 April 1937 Sunderland, with no chance of retaining their champions' crown and free of any relegation worries, rested eight players after their semi-final win two days earlier. They shouldn't have done. The Mariners would have scored double figures had it not been for an astonishing display by Sunderland's goalkeeper.

The game was memorable for the fact that Town's talismanic centre-forward, Pat Glover, scored five times. No one had ever done that in a top flight game for Grimsby, and possibly never will. What a remarkable game it must have been for Town's supporters as Glover's forehead and feet tormented the opposition.

As if the game was not fascinating enough, it's what happened afterwards that caused my heart to flutter. It appears that Glover was not given the match ball as a memento of his achievement. To be fair, he probably had enough match balls given his scoring record. Instead, the ball was taken by George Pearce, Town's chairman at the time. Pearce had been invited to attend a meeting of the Kirton Cup committee, who were responsible for organising a knock-out tournament for amateur sides in south Lincolnshire. I am speculating now, but I think that Pearce probably attended as a gesture of good will by the powerful Grimsby Town club, who obtained at least some of their signings from local Lincolnshire amateur clubs.

Pearce took the match ball from the Sunderland game and presented it to the committee who decided to use it for the final between Kirton Clough and Holbeach St Marks. Gosberton won the game 4-1, and after the medals and trophies had been awarded, I'm guessing there was some kind of social function. The Boston Chronicle tells us that the ball was won in a competition, which I assume was some kind of raffle or auction, by a Mr Wood of Gosberton Clough.

My imagination started to run wild. A simple trip to Gosberton Clough, a knock on a door, and the sight of a football in a display cabinet would enable me to go triumphantly to Blundell Park as Grimsby Town's own Indiana Jones, though hopefully without being chased by Nazis over the Lincolnshire Wolds. What a hero I would be!

Wow! What would turn out to be one of the significant match balls in Grimsby Town's history was simply given away, but at least we knew who got it and where he lived. With far too much time on my hands, I was determined to track down the ball.

My imagination started to run wild. A simple trip to Gosberton Clough, a knock on a door, and the sight of a football in a display cabinet would enable me to go triumphantly to Blundell Park as Grimsby Town's own Indiana Jones, though hopefully without being chased by Nazis over the Lincolnshire Wolds. What a hero I would be! Move over Mr Stockwood, it's me the DN35 podcast will want to interview, and I shall be happy to talk to them from the former Blundell Park which has now been renamed in my honour.

Sadly, I don't have the research skills to track down people from the past. Fortunately, Dave Wherry, the man who knows Town's sock manufacturers from 1967, does. Armed with the minimum of information, he came back to me in under an hour with a list of plausible candidates. The most promising of these was a George E. Wood. In the 1933 register, he is identified as a 37-year-old agricultural labourer living in Gosberton Clough with his wife. The 1911 census had him living at First Fen in Gosberton Clough. Sadly, George passed away in 1984, and his wife in 1986, and they had no children. Nor did George's wife's brother, who lived in the area, so we didn't even have a nephew or niece who might have inherited Glover's ball.

"Drawn a blank, I'm afraid" wrote Dave in a weary text message. But then, my haphazard googling led me to the Gosberton & District Historical Society, an organisation which has, surprisingly to me at least, around 140 members. The phone number on the website turned out to be wrong, and as the lady who answered the phone told me, I had reached the vicarage. She listened to my story, and helpfully gave me a few leads. Her husband then came to the phone and after listening to the same story said "I think you might have hit the jackpot."

It turned out that he was a member of the historical society, as were several people called Wood, and that one of them, Ron, was also interested in local sport and had discovered a thought-to-be-lost trophy from the 1960s. Ron was my kind of guy, and I was back in business.

I emailed Ron and outlined the story about Glover, the Mr Wood who had won the football, and who we believed him to be. Ron emailed back almost immediately. The man Dave Wherry had identified as George E. Wood was Ron's uncle. Sadly, "He was not into football." However, Ron's father, Sydney Gilbert Wood, a 23-year-old in 1937 was. Evidently, he had played in goal for Gosberton Clough and was later their manager and secretary. 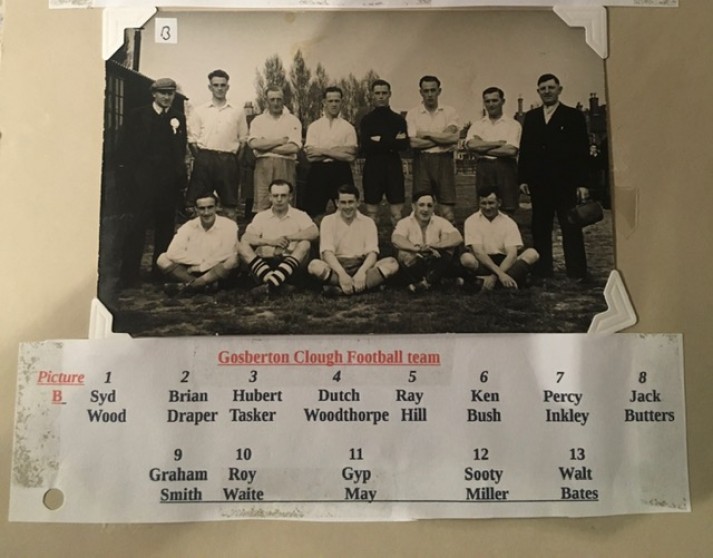 Gosberton Clough FC, in the 1950s. Ron Wood's father Syd is on the left in the back row

And then came the crushing blow: "I don't know anything about a football as a prize". My correspondent was born in 1944. Gosberton Clough no longer had a football club, but he remembers that "as a teenager in the early 1960s there were always plenty of footballs to play with, and the tools to blow them up and lace them up. We had patches to mend the bladders etc. so it could be possible one of those balls was the elusive one. I'm afraid I don't know."

And there the story seems to end. It appears that Pat Glover's five-goal ball probably ended its life in a dustbin in deepest south Lincolnshire. I can picture Ron bringing the ball home and booting it into the garden where it probably remained until he had his own children, its future significance not even entering Ron's mind.

And why should it? We don't exactly have a great reputation at Grimsby Town for cherishing the past, as anyone familiar with the story of Kevin Drinkell's match ball from 1980 will agree, so why would Ron have done in 1937?

I'm sorry the story ends like a National Geographic channel documentary which calls itself "The secrets of the Bermuda Triangle" and then reveals that there aren't any, but the search for Glover's ball has ended in failure. Oh well, at least I won't be displacing Mr. Stockwood on the DN35 podcast any time soon.