Kristine Green has been a Grimsby Town supporter for 30 years and has seen us from the second division to the non-League, rarely do Town have a season of 'nothing to play for'. She describes herself as incredibly lucky, through hard work over the last few years, to sit on the board of the club as a supporter representative. 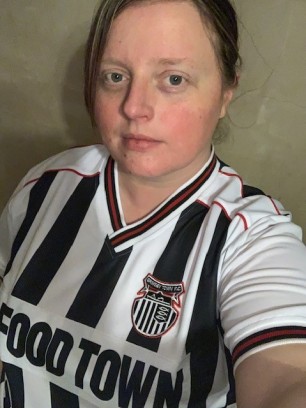 I'm a Town fan because Grimsby is where I was born and the team that my uncle supports.

What "should" be your team if you followed the family tree?
Town – simple as that.

When we find ourselves in times of trouble do you have you a secret second team that you turn to?
I go watch Clee Town when Town haven't got a game but would never turn my back on the Mariners.

Where was your first seat/standing position and where do you like to sit now?
First seat was in the Upper when I started going regularly in the late '90s. Once I got older and had to pay for my ticket I moved to the Pontoon and have been there ever since.

When did you first write anything about Town?
When I filled in my 'Codhead of the week' form in for The Fishy

How did you get involved with CA?
I can't quite remember how it started. I think I was asked to do a one-off piece on something and then wrote once a month before workload meant I struggled to do that a few years ago.

Where's the oddest place you've bumped into a fellow Town fan?
Wouldn't say bumped into but, back in 2016, we were walking around New York and a bellowing 'Up The Mariners' came from somewhere. The kids had their shirts on and had obviously been spotted.

Which Town manager have you found yourself near and where?
Probably not a question aimed for me. I'm incredibly lucky to be involved at the club so have been able to be near/around the current manager.

Otherwise, back in the late '90s I'd hang around the Main Stand in the summer waiting for players to come out of the changing room during the week so was able to meet Alan Buckley.

Steve Meek, infamously, once helped John Shelton Fenty erect a gazebo. Have you got a John Fenty moment?
No!

What or who did you get wrong?
I'm not going to go for the obvious here and I'm going to say Mark Nicholls, the young lad we got in from Chelsea back in 2000. Thought he'd tear it up and bag a few goals for us. Turned out he scored zero and I don't think he did much more for anybody after?

Who is the best player you've seen playing in a Town match?
A difficult one as we've had a few. I think I'll stick to my go-to in Andy Todd. As a loan player, he made such as impact in a short space of time (I don't quite remember Dave Beasant). Michael Reddy was a class player and lower down the leagues we've had some good players, probably Liam Hearn tops that list. The player I always wonder about is Paul Groves – what would be his transfer fee in the modern game, he was that good.

Do you care about the national team?
I don't care enough to absolutely make sure that I'm not doing anything else to watch or go but I absolutely support them when they play – men or women.

What's your favourite Town kit?
I had a goalkeeper shirt, again in the late '90s when Aidan Davison played for us. A high collar with Lotto on and pads on the arms. Absolutely loved it, lived in it during the summer months when I first got it.

Socks. Red, White or Black?
Red or black, not white

Where's the wettest you've been watching a Town game?
It's either Accrington away a few years ago where my coat wasn't as waterproof as I thought and so got wet through. Bromley last season is the obvious one where the monsoon drove at the Town fans second half, but I had a new Town raincoat that I had purchased only a couple of weeks before. So only the legs and feet got wet!

Where have you been the most miserable when following Town?
Probably the 8-1 loss at Hartlepool on a Friday night. Wondering why I stayed until the end.

Did you ever call Clubcall? If so, where from?
I did – from the house phone. Did it a few times until the phone bill came in. Safe to say I didn't do it again!

How many Town mugs have you got?
None!! I had one but dropped it and haven't got round to replacing it. Poor form from me.

Have you infected anyone with the Town? How are they today?
Both kids (now 13 and 17) have been supporting Town since they were 18-months old, home and away. Safe to say they are doing superbly well and my parenting has been supported by the fact that they are now old enough to not bother but still do.

Did you ever see Glen Downey?
Think I did, but wouldn't like to say for sure.