Phil Ball describes himself as having been dragged up in Cleethorpes, now living and working in San Sebastián in the Basque Country. He works in education by day and writes books and other nonsense by night. His wife is suitably baffled by his devotion to GTFC mugs. 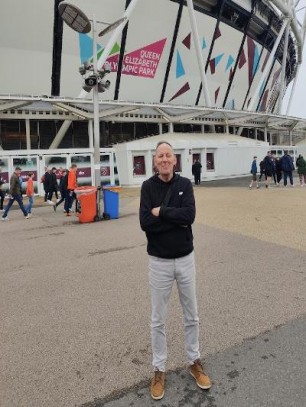 Destiny, innit? I was brought up in Cleggy. It seemed the logical thing to do.

Where was your first seat/standing position and where do you like to sit now?
As a kid and youth I stalked the Pontoon, but when my balls dropped for good I moved to the old Barrett’s Stand. The comments were wittier and I preferred the view. Last time I was back I went in the Findus. Same reasons.

When did you first write anything about Town?
In that fine publication Sing When We're Fishing – back in the Early Pleistocene period.

How did you get involved with CA?
I've lived abroad since The Jurassic Period (1983) and have suffered from time to time as regards a decent information source on the club. When CA came along, my life-quality experienced a considerable boost. I've written in other media about this, so I don't want to praise you too much lest you become complacent.

When we find ourselves in times of trouble do you have you a secret second team that you turn to?
I've lived in San Sebastian for 32 years, and I am a paid-up member of Real Sociedad. My son came through their ranks and I also love the club for their modesty and style, but I suppose that if push came to shove…I also wanted my son to play for Town, but when he got to 18 it was obvious that he had loftier ambitions. Sigh. He was also unconvinced by the draw of fish and chips.

Which Town manager have you found yourself near and where?
Well that's been tricky for me, as an expat. But I do recall McMenemy watching us from the Clee Grammar touchline once, with Jim Clunie. I picked up the ball for a throw-in and McMenemy, close by, quietly suggested that I throw it down the line. When I did the opposite, I heard him say "For fuck's sake" under his breath. That was the end of my fledgling Town career.

Have you ever played football with, or against, any Town player?
Of course. Terry Donovan was a year below at Clee Grammar, but was so good he always played with us. I taught him all he knew, but oddly enough he never mentions this.

Which player do you love and why?
I'm not sure if you want me to answer historically or mention a current player, so I'll do both. I love(d) Matt Tees because he was so unlikely, in every sense, and because he made me understand how much better it was to support a crap club…if you get my drift. Now I rather like that Waterfall chap, both for his surname and for the fact that he has also realised how much better it is to play for Town than for anyone else.

What or who did you get wrong?
I thought Mike Hickman was shit, but looking back I was very wrong. I just thought he ran a bit funny. When I die and St Peter questions me on that one, I'll put him straight.

Where's the oddest place you've bumped into a fellow Town fan?
In a two-horse town called Porvenir, on the Chilean side of Tierra del Fuego in 1985. Beat that. The only reason that both of us were on that side, was that after the Falklands War, the Argentines wouldn't let Brits over the border. I got talking to him in a dismal café. Bizarre stuff. He was actually from Immingham, so Porvenir seemed like a cool place to him.

Did you ever see Glen Downey?
Unfortunately no. But I do plan to visit his fish and chip shop on Wearside.

Where have you been the most miserable when following Town?
Preston. I was at Lancaster Uni and so it was a quick trip down the road. It was one of Joe Waters' first games. We equalised in the 88th minute and I went apeshit, surrounded by Preston fans. They made it 2-1 a minute later, and quite justifiably returned the favour. It was a learning experience.

Where's the wettest you’ve been watching a Town game?
Good one. These things do tend to stay with you. Gresty Road, circa 1976. Soaked. We drew, I think.

Have you ever played other sports/games with or against Town players?
Yes. Every time I eat blue cheese I dream that I'm in bed with Wayne Burnett. Oddly enough, he's usually reading me extracts from Jean-Paul Sartre's The Age of Reason.

Favourite John Moore or Rolyism?
Roly-Poly is my favourite. I've always loved the way he talks to the players through the commentary, like he's praising or scolding a bunch of schoolkids. It's unique. I also think that he understands football in a way that many national commentators do not. To summarise - legend.

Favourite Tony Butcherisms from the million words of woe
There are too many to choose from. He should either be the next Poet Laureate or be offered the Nobel Prize for Literature. He did once reference a Captain Beefheart song – it might have been Big Eyed Beans from Venus. He might deny this, but I swear it happened.

How many Town mugs have you got?
Loads. My missus always tries to throw them away but she never succeeds. One of them is so faded by the dishwasher that you could mistake it for an entirely different concept, but it comforts me to sup tea from it most mornings, here in the wilds of the Basque Country.

New ground or redevelopment of Blundell Park?
The latter. It doesn't seem so difficult to me. What's all the fuss about?

Are you bothered which division Town are in?
Not really, no. But it's always nice to get promoted. I kind of liked the National League, and all its foibles.

If you could turn back time?
We wouldn't have signed Mike Lyons.