Dan Humphrey is a relatively new CA diarist but long-term sporadic contributor who was involved with the Mariners Trust. He cycles and runs a bit, lives locally and even played a few games for the Internet Mariners a while back. He sits in the Lower Whatsitcalled and also gets to a few away games each season. 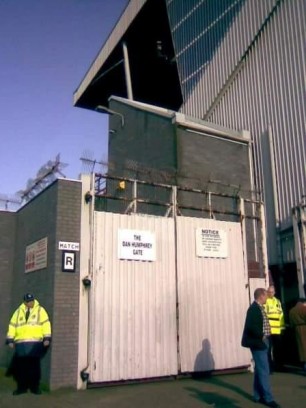 Alan Buckley's first spell really made me fall in love with GTFC in my teens, though I'd first attended as a mascot aged seven. I did one of those 'pick your favourite GTFC XI' for the programme and it was largely Buckley-era players.

What 'should' be your team if you followed the family tree?
Based on my parents' birthplaces, it'd be Elgin City (dad), or Altrincham/Manchester City (mum). But I was born in Grimsby and I've come back to work and to live here. My children were born in Grimsby. I may be the main Grimsby-based CA contributor. Surely it is Grimsby Town?

Have you infected anyone with the Town? How are they today?
My 6-year old daughter is a work-in-progress mini-Town fan; matchday cuisine and Trust membership helps! She can name at least four players....

Also, an Evertonian friend has an extreme Town relationship. He saw us beat them at Goodison in 84-85, then saw us win at Anfield (Jevons game) but on his sole visit to BP we lost and were relegated under Groves. We seem to be his default second team, with the Wilko, Jevons, Oster, Dyson links as he dislikes the other Mersey-based sides. We don't mention Lyons or Newell though.

When did you first write anything about Town?
I sent an article to SWWF when I was maybe 15 and they contacted me to say, we like it, we may publish it, and they ran it as the very first article in the next issue. I was delighted and gobsmacked and suppose I've enjoyed writing occasionally ever since. The piece was about whenever we sell a player their career never recovers. I don't remember writing for them again though.

How did you get involved with CA?
Having dabbled with writing for SWWF, the Fishy, the Trust and the club programme and commentated on a Chairman's Challenge, I climbed a mountain to raise funds for the youth team with Pat Bell of CA. I have submitted an article every five years or so, until last season I volunteered to be an occasional CA diarist.

Steve Meek, infamously, once helped John Shelton Fenty erect a gazebo. Have you got a John Fenty moment?
When I was on the Mariners Trust Board I attended a trust/club meeting and John was reciting the entire club stadium history in detail. Which was fine except a) he'd told us before and b) it wasn't the issue of the meeting. I politely asked can we get back to the topic, and was ignored. Asked again, repeatedly, and got increasingly frustrated. I think Terry Rudrum had to intervene. I gave up on trust involvement not long after, with a feeling of not being listened to, and directed my voluntary efforts to other charitable causes.

Did you ever see Glen Downey?
At his absolute peak! On New Year's Eve 2005, a friend and I went to Wrexham for what became a legendary away trip. It had everything you'd want: Reddy's pace, multiple defensive injuries, mistaken cards, and the Glen Downey cameo, leading to the legendary goal. I mention it whenever I see a certain half dozen Town fans who I sat near that season, including CA's very own Messrs Dillerstone and Ives. They love hearing about it repeatedly, honest.

Where's the oddest place you've bumped into a fellow Town fan?
About a week after having first met CA's Tony Butcher away at Crewe, I saw him in a WH Smith in a London railway station, completely by chance, after a job interview.

Have you ever watched Town from the wrong end? How did you survive?
My dad got a Bolton season ticket when the Reebok Stadium was new as he'd moved near there, so I went with him to Bolton 2 Grimsby 2 in 2001, but in the home end. Zhang Enhua scored for us. They equalised and I forgot which end I was in and berated the linesman in front of me for not flagging for offside. I was possibly the only Town fan to complain as I had a better view from the side. Scant consolation that Macca and Stacy Coldicott also protested and got booked.

Where's the wettest you've been watching a Town game?
Macclesfield at home August 2019 in the League Cup. Horizontal torrential rain. Before then, I thought the early 90s Sunderland televised abandoned game was bad, but Macclesfield was like something from a disaster movie.

Which player do you love and why?
I want to say Clive Mendonca. Or Paul Groves. Or Peter Handyside. But I'm gonna pick John Oster. Such a quality player, clear from the first time you saw him play that he could beat players and create chances. A game changer. I never understood why Everton bought him and then rarely played him on the wing. Randomly, I just missed him on a night out in Newcastle once where I had a drink with Gavin McCann instead.

Who is the best player you've seen playing in a Town match?
Dennis Bergkamp at Highbury; such a quality player that our group saw him warming up and sighed disappointedly.

Are you bothered which division Town are in?
Of course, it irritates me to see Hull or indeed any 'rugby' town (Wigan, Salford etc) in a division above us, let alone Franchise Scum. I miss us being the underdog in the second tier and miss playing plenty of Yorkshire teams too.

Have you ever exchanged words with Alan Buckley?
I used to regularly see AB in either Grimsby's Marks and Spencer or the coffee shop part of House of Fraser. During lunch breaks, I wasn't stalking him. I did get to play against him in a Chairman's Challenge, and he was wearing a massive coat, the type that coaches wear for taking training in winter, under his GTFC shirt. It wasn't even cold. I part-conceded a dubious penalty to him, he cut in between me and the centre-back, fell over, and the referee pointed to the spot. I never touched him, we both insisted.

Are you a forgiving soul? What is the longest Town-related grudge you hold?
There are a few. The longest is Mick Lyons who dismantled a decent team. Then Nicky Law for not letting the players applaud GTFC fans when they were relegated at Tranmere. And Ian Runaway for obvious reasons. I enjoyed comparing how classy Michael Jolley's departure was compared to Ollie's feeble excuses.

Six degrees of separation: any friends and family connections giving you an 'in'
One of my cousins went to nursery near Glasgow with Mark Hateley's kids and Basile Boli's kids. Ah, you meant more Grimsby-related? Jack Lester was at my eldest daughter's Christening but only because they were doing another Christening at the same time. This year I've been studying a part-time business/management course with Paul Walker.

Where have you been the most miserable when following Town?
One season in the mid-nineties my away season aggregate record was GTFC 3 Opposition 17. For a single incident, an interminably long train journey shared with downbeat north-west-based Town fans from Cleethorpes after the 1997 relegation. Or maybe Bristol Rovers at Wembley which just seemed so unfair. But my friend thought up the idea which quickly became Operation Promotion on the way back, so every cloud...

And what's the high point?
Grimsby Town 3 Forest Green 1 just beats beating Liverpool in their own backyard whilst living in Liverpool. It's too soon to assess this year's play-off madness, but it will quite likely win when it eventually sinks in.

If you could turn back time?
Imagine if there'd been an influx of Mariners Trust members from day one and the trust had received a clear mandate to challenge/oppose Fenty earlier and more strongly. Or, if some other fans than the Mullens won the Euro Millions, or the current regime had come in a year or five earlier: owners who listen to the fans, who are fans, who just seem to get it.