Tom Sargent describes himself as being crap at football but an average darts player. The scarf he wears to Grimsby games is the first one he was ever given by his parents. It's his pride and joy of GTFC clobber. It's so old the manufacturer's phone number on the label doesn't even have a 1 in the area dialling code. 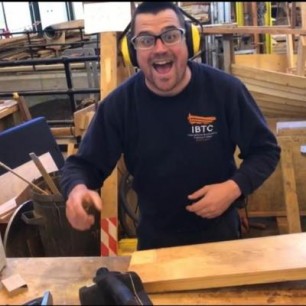 I was born in Grimsby - we lived in Littlefields until we moved to Ingoldmells, near Skegness, and my dad started taking me to reserve matches until I fell asleep. That was enough to get the bug, although he says I was more interested by the floodlights than the actual football.

Where was your first seat/standing position and where do you like to sit now?
In the Main Stand. We now sit in the Upper Smiths

When did you first write anything about Town?
The modern way - I started a blog which got into the programme and then CA and the DN35 Podcast.

When we find ourselves in times of trouble do you have you a secret second team that you turn to?
I have lots of other teams I take an interest in because I've lived in lots of places. I'll run you through a few of them.

Boston United because they were our local non-League team (Skeg Town, where I grew up, weren't in the pyramid then) when my brother and I first started going to matches. If there was a game on and Town were away, we'd go.

Clermont Foot - This was my local team during my time abroad at university. Until they rejigged the French pyramid a few seasons back I'd been to a match at every level of the French system from parks football through to the top flight.

Santutxu - now in the Basque 'Regional' but in Tercera when I lived in Bilbao. The people at that club were wonderful to me. I travelled with them to away matches on the team coach, got free tickets, sandwiches and learnt how to swear in Spanish. This was all in exchange for helping load and unload the kit before and after games. I think they thought I was mad. The first away game I went to I was presented as "just some English guy who likes football".

St. Patrick's Athletic - I worked in Dublin for two years so had a season ticket at Richmond Park. I even got to see them in the Champions League which was the first time I'd watched European football live. I used to write the away team preview in the programme until a couple of years ago. In one preview I irked the Shamrock Rovers editor into a Twitter spat which was picked up by the Irish Daily Star. They ran with the headline "the gloves are off".

Grange Albion - I volunteered at Grange Albion who were in the fourth tier of the Welsh league when I lived in Cardiff. A club with so much potential but sadly not enough interested locals.

Moneyfields - they are my local team in Portsmouth. They play in the Wessex League. Since moving down here I pop down and watch them as their ground is pretty much at the end of my road.

Which Town player/manager have you found yourself near and where?
My dad coached at the Grimsby school of excellence for a long time so through him I got to meet both Neil Woods and Gary Croft when he was coaching. I was definitely more excited about it.

Have you ever played football with, or against, any Town player?
Wes Parker's brother Liam was in my local team East Coast Juniors and he trained with us regularly when he was in Town's youth ranks. Miles Chamberlain was in the age group below and we played against each in school tournaments. Both only made a handful of appearances between them but it was a great source of local pride to see them pull on the black and white stripes.

Where's the oddest place you've bumped into a fellow Town fan?
Nowhere really, but on holiday in America once a lad came steaming up some stairs to my brother and I who were both wearing black and white shirts and blurted in an excited Scottish accent "are you Dunfermline fans?!"

Have you infected anyone with the Town? How are they today?
Oh yes, lots of French and Basque people. As well as The Grange pub in Cardiff. I supplied two people in Bilbao with Town shirts and at least four in France.

Did you ever call Clubcall? If so, where from?
No, wouldn't have been allowed to at those call costs!

Did you ever see Glen Downey?
Sadly, yes. For Town and Southport.

Have you ever exchanged words with Alan Buckley?
I shouted "Sir Alan" at him at Boston Town v Grimsby Town youth a long while back. He waved - I was pleased. I had a double whammy of fame shame at that match as Boston United legend Paul Bastock was there too.

What or who did you get wrong?
Gary Jones - I thought when he first signed he was symptomatic of our, in my opinion, more direct style under Slade but he turned out to be a good player for us. I actually met him last season after Marine versus Bootle and we chatted about 'that' goal.

Are you a forgiving soul? What is the longest Town-related grudge you hold.
Don't most Town fans hate Wolves? That's a pretty long collective grudge? I'm definitely in on that one.

Are you bothered which division Town are in?
Not particularly. I'd most like to see us win the FA Cup one day but I liked non-League, it was fun. We won a lot more regularly and it saw the rebirth of our away following for a younger generation.

How many Town mugs have you got?
Two or three. I have imposed one on my in-laws in Cardiff as well. I'm pleased to report they use it.

Have you got any Cod Almighty T-shirts?
The Grimsby is not in Yorkshire one.

Where have you been the most miserable when following Town?
Braintree away. You had to be there. It was the point I realised we'd hit rock bottom as a club.

If you could turn back time?
To the 1930s to experience every round of those Cup runs.