I started watching regularly at the start of the 1971-72 season which, let’s face it, was pretty fortuitous. No wonder I have been hooked ever since. I became an exile in 1978 since when I have been spreading the G word to the uninitiated like a seventeenth century missionary. After a career in the music industry I am now retired and working on my novel, which oddly makes no mention of Grimsby or even Alan Buckley. 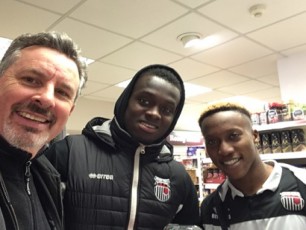 I was born during a Town game. My Dad missed the match, which we won, so supporting Town all my life was my way of making up to him for my bad timing.

Where was your first seat/standing position and where do you like to sit now?
The Barratt Stand. I now sit in the Findus, or whatever it's called now. Assuming I can get a ticket that is.

When did you first write anything about Town?
Articles in SWWF and When Saturday Comes in the mid-eighties.

How did you get involved with CA?
I met Pat Bell at the We Are Town book launch and agreed to write for CA.

When we find ourselves in times of trouble do you have you a secret second team that you turn to?
No. How dare you make such an ignoble suggestion.

Which Town player have you found yourself near and where?
I bumped into Siriki Dembele and Akheem Rose in the St Peter's Avenue Sainsbury's immediately after the Port Vale game under Jolley in 2018. I asked them for a selfie. They looked rather bemused. "It's for my son", I lied. I'd been drinking, obviously.

Did you ever see Glen Downey?
I want to say no, but I have a sneaking suspicion that I did see him once but had the memories expunged through hypnotherapy.

Steve Meek, infamously, once helped John Shelton Fenty erect a gazebo. Have you got a John Fenty moment?
The moment he sold the club to Jason Stockwood will do just fine for me.

Which player do you love and why?
Joe Waters. It's obvious, surely?

Which former player do you loathe and why?
Mike Lyons. Do you really need to ask?

Who is the best player you've seen playing in a Town match?
Let me think about that one. It was either Glen Downey or Ruud Gullit.

Where's the wettest you've been watching a Town game?
Plough Lane in the 1980s during a monsoon. The only shelter available to away supporters was the portacabin toilet which ended up crammed with blokes. I think it was the ladies too.

Have you ever watched Town from the wrong end? How did you survive?
I was at Rochdale once when the crowd changed ends at half time. Does that count?

Favourite John Moore or Rolyism?
A game one December. The opposition hit the post when it would have been easier to score. "Happy Christmas Grimsby", came Roly's droll response.

Did you ever call Clubcall? If so, where from?
Yes. Every day at one stage. I confess it was from my work phone and must have cost a fortune. But that was years ago and so I am probably safe, given the statute of limitations.

Have you ever exchanged words with Alan Buckley?
Yes. I asked him to sign my copy of We Are Town at the book launch. I thanked him for everything he had done for the club. "It was the players really", he replied modestly. I plucked up the courage from somewhere to disagree with the great man. I'd been drinking, obviously.

Six degrees of separation: friends and family connections giving you an 'in'…or not
As a kid I lived next door to ex-keeper George Moulson. I kept booting the ball against his garage, knocking paint tins off the shelf onto his car.

Favourite Tony Butcherisms from the million words of woe
Not sure if this counts but Tony and I were watching an abject performance at Cambridge in 2018. "Well, it can't get any worse than this." I said. "Yes it can." he replied, "Kelly could come on." I thought he had lost his mind. But then Kelly came on…

How many Town mugs have you got?
Two whole ones and a few shards and splinters.

Have you infected anyone with the Town? How are they today?
Almost everyone I meet. As a long term exile I am often the only Town fan people have met. Once the seed is planted people don't seem to be able to shake it off and are condemned to a life of looking for the Town result every week. One young lad once said to me "Since you mentioned Grimsby Town I can't stop thinking about it." I believe he is now out of therapy and leading an almost normal life.