Lifelong Healing resident Bernard Mooney, 66, was a professional footballer for both Grimsby Town and Scunthorpe United in the late seventies and early eighties. Here he chats to Stephen Meek about an incident-packed career playing for a number of Lincolnshire clubs.

Q: How did you come to the attention of GTFC? Did you go for a trial? 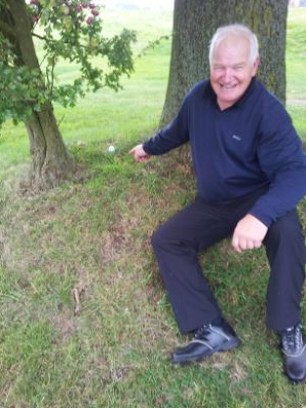 A: It was a much more informal process in those days! I was a mechanic at the Mercedes Benz garage and Grimsby Chairman Tom Lindley used to take his car in to be fixed. I was knocking in goals for a local team and our receptionist told Tom to watch me play. He asked me to play in a game at Skegness so he could have a look at me. I remember sitting next to Terry Donovan on the coach and he told me "Remember, Bernard, I score the goals!" We won 2-0 and I scored both of them. I decided to sit next to someone else on the way back.

Q: How old were you at the time?
A: Twenty. I was a late starter.

Q: And then you became a regular in the reserves?
A: Yes. I remember playing against Middlesborough and seeing big Jack Charlton on the touchline. They had a player called Stan Cummins who was supposed to be the next big thing. He was only very young but he was superb that night. To this day I think he was still the best player I ever played against. The great thing was that manager John Newman called me into the office the next day. I wondered why on earth he wanted to talk to me. He told me that my pay packet was waiting. I didn't know I was getting paid! In those days you got £15 a game. I was a professional now!

Q: What do you remember about John Newman?
A: He was a lovely man. A lovely, kind man. The only trouble with him I recall was a half-time team talk he gave when the first half hadn't gone well. He accused Kevin Moore of not trying, and Kevin reacted badly. Now Kev was a lovely man as well but it started to get physical and I was sitting there thinking "this is a bit intense, stay out of it." Then John Newman turned to me and said "That young man is the only one of you who is trying!" I remember thinking "don't get me involved in this, boss, I'm just sitting here minding my own business!" Anyway, around this time Town offered me a year's contract and I'd just got married to my wife Alison so things were looking good for the future.

Q: Who was the most skilful player you played with at Town?
A: I'd say Mike Lester. We had a lot of talent at that time, though, so competition was fierce. I remember playing for the first team away at Notts County when Jimmy Sirrel was their manager and scoring, which was very satisfying. There was also a game at Doncaster when myself, Terry Donovan and Kevin Drinkell were all fighting it out for the striker's jersey. In the second minute a cross came in and I headed it home. That'll do my cause a lot of good with the manager, I thought, only to look across to an empty dugout. He hadn't arrived yet and hadn't seen my goal. I was gutted!

Q: Who was your best friend at the club?
A: Nigel Batch. He was a great guy and we got on very well.

Q: Did you ever get into any trouble on the pitch in those days?
A: Not really. I remember there was a player called Riley – I can't remember who he played for – who had a reputation for spitting at people. He tried it on in our box once, and myself and our keeper John Grest both had a go at him and he went down. Me and John to this day still don't know which of us actually made contact, it was hard to tell in the melée.

Q: What was the jump from Sunday league to professional football like?
A: Massive. The physical conditioning and fitness of professionals is in a different league. It's a huge bridge to cross for aspiring young footballers.

Q: Which Town player do you think was the most underrated?
A: Tony Gallimore. Alan Buckley used to love him and if anyone knew a good footballer it was Alan Buckley. I was a big fan of Paul Groves as well.

Q: Any other Town matches that stand out for you?
I played in Bob Cummings's testimonial game against Southampton. There were lots of great players there on the day, including Chris Nicholl. We won 2-0 and I got them both. At Blundell Park I always wanted to score at the Pontoon end but I never did! I scored a few at the other end though.

Q: How did your time at Town come to an end?
A: It was very strange. I just sort of drifted away. I was offered a job at the oil refinery and I decided to take it. I'd been doing okay but no-one was calling me from the club. Then I bumped into Tony Ford in the street and he asked me how the job at the oil rig was going. Apparently at the club they all thought I was working on an oil rig and that's why nobody had been in touch! There's a big difference between a rig and a refinery!

By this time George Kerr was the manager and we had a meeting to sort things out. He told me there was just too much striking talent at the club and they could let me go. But he knew Scunthrope were looking for forwards and they were keen to have me. Ron Ashman called that day and I went to play in a reserve match for them.

Q: I understand that was an interesting night...
A: It was! I rolled up and there were people everywhere. Turned out there was an attendance of over 5,000. I thought, surely they haven't come to see me! What I didn't know was that Ian Botham was making his debut for Scunthorpe reserves as well that night and it had attracted a lot of interest.I had a shot which the keeper saved and it rebounded to Botham who knocked it in! There was a picture of the goal on the back page of the Daily Mirror the next day, and you can clearly see my leg!

Q: What was Botham like to play with?
A: He was okay, and he scored that night. What people don't remember is that I had a shot which the keeper saved and it rebounded to Botham who knocked it in! There was a picture of the goal on the back page of the Daily Mirror the next day, and you can clearly see my leg! That was as close as I ever came to football stardom. Off the pitch he was rather aloof – the Scunny players all used the same manky towel to dry themselves with – it was traditional – but Botham refused. And he pinched my shampoo!

Q: Were you ever recognised in the street during your professional career?
A: When I played away at Middlesborough a very attractive girl came up to me and asked for my autograph. She then gave me a box of chocolates! The other players insisted it was a case of mistaken identity but it was very nice anyway.

Q: What happened after Scunthorpe?
A: I played a lot for Brigg town and Winterton.

Q: Any more meetings with famous players?
A: I went to see Kevin Keegan do a talk at the Humber Royal. Afterwards he was chatting and he found out I used to play for Scunthorpe United like he did and he insisted on giving me a lift home! This is after he had done the lot, including managing England. He had this lovely Range Rover and when we got back to my house I was expecting him just to wave and go but he stayed and chatted for hours. He talked about Mike Ashley at Newcastle, the England job, his whole career basically. While he was chatting I was hoping a policeman would come along to see who was parked up at that time of night. He would have thought, well, if Kevin Keegan is the chauffeur, that other chap must be very important! In the end we chatted until 3.30 in the morning and I have to say he was a super chap and very easy to talk to.

Q: And of course you still play to this day?
A: Yes, still turning out for Grimsby Ancient Mariners, and still enjoying the game.

Q: Thank you Bernard, what a fascinating life!
A: My pleasure!