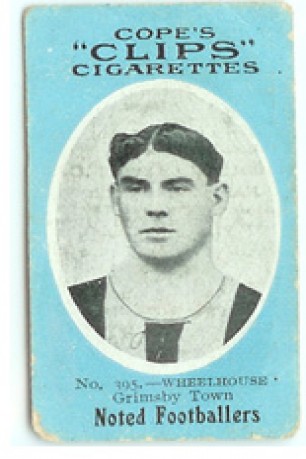 Part 1: Never one to be left behind

This is the story of a decade in the life of the Grimsby Town captain before the First World War, Sid Wheelhouse. It begins on a hot Saturday afternoon, 21 September 1907, with Grimsby away to Fulham at Craven Cottage. Sid had just arrived as a young full-back from Darlington. Big and square-shouldered, in an age when defenders did just that, he had struggled in his first couple of games for Town, near the bottom of the Football League's second division. In particular, he had had a disastrous local derby against Lincoln City, where the winger he was supposed to mark had run rings round him. But this was his day.

The sun shone, and the visitors pinched a goal around the middle of the first half and went in one up at half time. From then, it was backs to the wall, as the Grimsby Telegraph reported: "It was hot work. Wheelhouse and Vincett never made a single slip, and the certainty of their kicking from all positions was truly wonderful." In front of over 20,000 people, it became clear "that the Town have as fine a pair of backs as any in the division".

That was England by the Thames in 1907. (There was no stand shutting out the view of the river then.) Edward VII was still on the throne, and the empire was at its height. Altogether, it was a great Saturday for the small group of supporters who accompanied the team to London with little hope: "It is hard to say who received the biggest shock on Saturday, the supporters of Fulham or of Grimsby Town." A memorable afternoon.

Sid probably remembered it in years to come, which took him to the heart of the Grimsby side and of the community. By 1914, he was the established skipper, and a regular in all the popular national collections of "prominent players", the cigarette cards that still give the feel of those long-ago times. There was not much point for such a man in moving clubs. Until 1910, the rules imposed a Â£10 limit on what any player could earn from a transfer and even then it was not much more. He was married, to Susan, and the children were arriving. It was a stable life, fighting for Grimsby in the second division.

In the face of mounting criticism, the FA established a Footballers' Battalion to uphold the honour of the game

Even the start of the First World War did not immediately disrupt the pattern. To the dismay and increasing outrage of the authorities, the Football League refused to cancel the season after war broke out in August 1914. Sid and the boys were back in action, though they began with a disheartening defeat against Nottingham Forest.

The pressure grew. Christmas passed and the promised victory over Germany did not arrive. Football at the front line against the enemy briefly filled the headlines, and then the stalemate went on. Conscription was edging nearer. Meanwhile, in the face of mounting criticism, the FA established a Footballers' Battalion to uphold the honour of the game. It gradually filled up, with players and also supporters: the 17th Battalion of the Duke of Cambridge's Middlesex Regiment.

Monday 1 March 1915. It was a cold spring. A small huddle gathered on the station platform to watch the midday train for London leave Grimsby. In one of the carriages, there was a group of young men in their best suits. The centre of the occasion was big Sid, broad-shouldered and now slightly stocky, his dark hair longer than was usual. Around him were six of his teammates: Percy Summers, a new goalkeeper signed that year from Chesterfield; the young midfield trio, Frank Martin, David Kenny and GP McKenna; and two of the forwards, Alf Gregson and David Chambers. It was the nucleus of a good team. Frank in particular was known to be promising, having already shown signs of talent at Hull City. But this morning, they were leaving the game behind, it seemed.

At 12:35 the train pulled out of the station, steam rising into the cold sky. They were on their way to Kingsway, to enlist in the Footballers' Battalion. A couple of weeks before, the son of the local MP, young Lieutenant Tickler, had visited the Grimsby players, to impress upon them the nation's need and increasing scandal of continuing to play professional football. Sid had given in, though his wife and now three children would still have provided reasons for holding out at that period. In 1915, the call-up centred on young single men. But he was never one to be left behind. With him, there came the core of the team.

They had plenty to chat about on the way down. It had been an up-and-down season. The low point had been losing 6-0 against The Arsenal (as the old Woolwich club were now called after their move to Highbury) back in November. The local reporter was careful to explain that "Summers was never idle and saved several times". After the match, Sid observed that "The Arsenal ought to have had this lot last season". It would have taken the Londoners out of the second division, where they had been stuck.

Under a deal worked out with the army, the professionals were given train tickets to return to their teams every Saturday. The fixture list had to be completed

But February had brought Grimsby better times. The highlight was a thumping 6-1 victory over Stockport. That was the day when Sid himself, coming back from injury, "signalised his return to the team with a capital display". It seems that even the war had not prevented people from the usual grumbling about the football: "It is to be hoped that the team's detractors closely watched his play." Perhaps he was just past his peak by now. (Fans are an unforgiving lot.)

That winter, the Footballers' Battalion was gradually filling up. They had recruits from Aston Villa and Nottingham Forest, Notts County and Spurs, Chelsea and Birmingham City, Arsenal and Croydon Common, Clapton Orient and Huddersfield Town. Professional soldiers took most of the senior ranks, though there were a couple of football officers, notably Major Frank Buckley of Derby County, ex-army as he was.

British compromise prevailed. It was not quite the end of the season for Sid and his friends. Under a deal worked out with the army, the professionals were given train tickets to return to their teams every Saturday. The fixture list had to be completed. Meanwhile, army training went on during the week at White City and then marching round London to Hyde Park and back.

Sid was as good in the army as at the football. He was soon a corporal. He also got to turn out for Battalion teams that entertained crowds around the country in the gaps between marching, right up to their embarkation in November 1915. They were hard to beat and when the leagues were banned for the duration, the 'Football Soldiers' were the best side in the land.

The first weeks in Flanders that November were more wet and cold than anything else. On their inaugural night in the trenches, they lost one young lad, who had just gone on sentry in the dark, and saw enough to make them understand what was coming. But the hot times lay ahead: for now it was mainly discomfort and fear.

In part 2: the Footballers' Battalion in action. To comment on this story please use the Cod Almighty feedback form.