A rough guide to... Coventry City 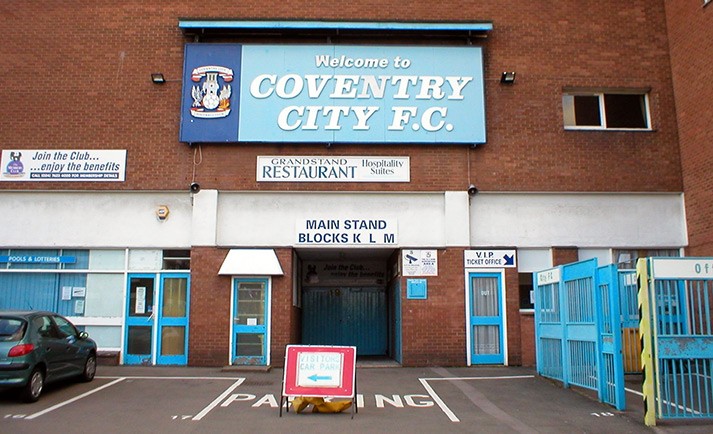 Good times, bad times, you know they've had their share. When the club left home to play at Sixfields. Well, the suits didn't seem to care.

The horror, the horror.

They used to be somebody. They used to be contenders. Now they don't even have bums on seats. And it's all down to money. The worst thing that ever happened was moving to a shiny stadium on the edge of town. Now they are close to the edge of oblivion, thanks to a hedge fund.

How? Why? When? Who? Coventry City are owned by the odious Otium Entertainment, a subsidiary of sickening sleazeballs SISU, a hedge fund. It's a tale so sad and convoluted that simplified summarising will not suffice. Read this for the flavour of the tasting menu. There are still court cases going on, right now, with claims and counterclaims and suing and very little wooing of that basic economic unit, the Coventry City football supporter.

There used to be a time when football was about feet and balls. Let's talk balls.

What have you been up to?

It all started in the summer of love, 1883, when bicycle makers Singers founded a football team, and in 1892 this became Coventry City, who joined the Football League in 1919. And nothing much happened at all for the next 40 years. Their only claim to fame was the FA's dithering over whether they were Third Division (South) or Third Division (North). They hold the distinction, with Town, of having played in every league of the Football League. The Premier League, you say? That's just accountancy in sponsored leisurewear. That's what got them in their present pickle: the price of fame was just too high.

Like Pompey, Coventry's history is full of flirtations with fame and financial ruin. Relegations avoided in the 1920s with dark mutterings about the bribing Bantams (their original nickname). The 1930s saw goals, goals, goals and debt, debt, debt, but their real golden years were the 40 years from the 1960s to the millennium, since when they haven't had a prayer. Jimmy the Chin arrived in 1961, changed the kit, changed the nickname, changed the nappies and changed their world forever as Coventry swung like a pendulum do, promotions and cup runs two by two.

Today, everything is different, they have to wait around like everyone else outside the Blinger League. They're an average nobody. They get to live the rest of their footballing life like a schnook

Promoted to the first division in 1967; played in the Inter Cities Fairs Cup in 1970 and then walloped by Bayern Munich; permanently not relegated throughout the 70s and 80s in mysterious end-of-season games; won the FA Cup in that 1987 cracker (check out Graham Rodger with real human hair). They were the Stoke City of the early Premiership years and then, in 2001, it all ended.

See, the hardest thing for Coventry was leaving the life. They had it all: paper bags filled with cash in the kitchen, anything they wanted was a phone call away. But everybody had their hands out. Everything was for the taking. And now it's all over. And that's the hardest part. Today, everything is different, they have to wait around like everyone else outside the Blinger League. They're an average nobody. They get to live the rest of their footballing life like a schnook.

So they're back where they started in 1959, before they went electric under the Jimmy Hill Experience. The rock-'n'-roll lifestyle has taken its toll, and all they have left are memories and a few old photographs of them standing near the footballing Fab Four. Expect them to pop up in a BBC4 Friday night documentary with a baffling anecdote involving Mick Quinn's moustache and a tumbler full of flaming sambuca. That's when football had characters, eh?

What kind of season did you have?

This club is going like a ghost club. Fans won't go no more. The people getting angry.

Oh my word, what can we say? At least they didn't have far to go to not watch cobblers after those wilderness years at Northampton. That's like Town playing at Skegness. Tennis balls stopped play at the Ricoh in February.

They couldn't score, they couldn't stop the opposition scoring. They were embarrassingly terrible. The only passion and fight came from the fans in the stands, with plastic toy pigs, flares, insults and those tennis balls all thrown towards the pitch at various games last year. They cared enough to make a point, while the players didn't care enough to even get a point from most games. What a shambles.

Like Town, they burned through three managers and a revolving set of bewildered and befuddled players. They started with Tony Mowbray in charge and sacked him before Christmas as it dawned on them that this was their darkest hour. In came a man with a reputation: Mr Russell Slade. A reputation for being a 'safe pair of hands'. Unlike his keeper. Fifteen games and three wins later, Slade was replaced by Mark Robins, an old bunny boiled in Scunny. Is it only professional cynics who think Slade's heart wasn't in it with that Big Job with Big John Fenty on the horizon?

How are you feeling?

I can't lie to you about their chances, but they do have our sympathy. No-one wants to get closer to the hedge fund. The birth of a wrong, the death of a dream. Those rapacious capitalists in SISU won't sell to anyone, no matter what the price, so they may limp on, limp on with hope in their heart as their dreams be tossed and blown in the Chancery Division of the High Court.

So here we are in deepest July and they have managed to sign players, despite having Tommy Widdrington as head of recruitment. And to play games of football – something that was not guaranteed after the shambolic shenanigans of the SISU seasons. They have high hopes of remembering to cut the grass before games – something that was not guaranteed to happen last year. McMulty from the Blades, Vincenti from Rochdale, McDonald from those Cobblers. Solid and effective professionals at this level. They look like men who know how to use a mower.

Perhaps Coventry crossed the line around the change of the summer and no-one noticed? They do look likely to be less of a pushover under Rockin' Robins, but who knows anything before the second test has finished?

The people of Mercia just want their club back before they can get back to where they once belonged.

Where are you from?

There are only two things the world needs to know: Grimsby is not in Yorkshire, and Coventry is NOT IN BIRMINGHAM.

Coventry is right on the edge of England's phonetic crossroads. Don't mention Crossroads! That's right, Miss Diane, it's all nonce words to the south, normal words to the north of 'em. The general Southern English feature of the longer 'a' in words such as bath and path (becoming like the nonce words barth and parth) starts to occur, regardless of class or geodemographic grouping, across an east-to-west band of settlements somewhere between Southam and Banbury. That's why they talk funny. Or maybe you think that a load of crarp?

Historically Coventry was the most important seat of ribbon-making in the UK, then the centre of the bike world, slowly morphing from the Great Horseless Carriage Company to Rover and the production of London black cabs. They still make things now and then, here and there. It isn't what it was.

It's the city that surprisingly sent us the soundtrack of our lives. Ah yes, I remember you-oo. Frank Ifield and the velvet voice of Vince Hill paved the path of pop for the two-toners… and Pete Waterman

Benjamin's Britten's War Requiem was composed for opening of the rebuilt cathedral, complete with a Jacob Epstein sculpture. Dame Ellen Terry and Philip Larkin were born there and William Shakespeare once went to buy some butter in Binley, so local legend has it.

For you and me it's the city that surprisingly sent us the soundtrack of our lives. Ah yes, I remember you-oo. Frank Ifield and the velvet voice of Vince Hill paved the path of pop for the two-toners… and Pete Waterman.

Excuse me while I adjust… my glasses… Did you know that the scenes in The Italian Job with the Minis thrashing through the sewers was actually filmed in Coventry, as it had Britain's biggest sewer pipes? Now, not a lot of people know that.

You must be… the first

It's a city of firsts, if not thirsts.

The first ever British car was built in Coventry and, during World War II, it was twinned with Stalingrad, becoming the first in the world to do that city twinning thing. The local bigwigs didn't do it for the scenery and a swanky municipal freebie, you know, but they did bring back the devastation and concrete aesthetic in rebuilding the old town. Have you ever tried going round the inner ring road? The first town plan to have been modelled on Dante's Inferno.

Ernie Hunt won the first ever goal of the season on Match of the Day in 1970-71. A decade later those sly blues made Highfield Road the first all-seater stadium in Britain, and were the first in the League to have kit sponsors. They were the first ever to repent their sins and unconvert an all-seater stadium, bringing back standing pronto after protests. The seating killed the atmosphere. Jimmy did it for the game as a whole.

The hedge funders almost kept up the tradition of footballing firsts. One of their idiots in charge suggested the introduction of a 'text a substitute' option during matches, to raise funds. Supporters would be given a number they could text, at premium rates of course, to say who the manager should take off and who should come on. An announcement would be made at an unidentified "appropriate time" revealing the most (un)popular vote and the manager would be under instructions to comply with 'the market'.

And now they are our first home game of the season. How apt.